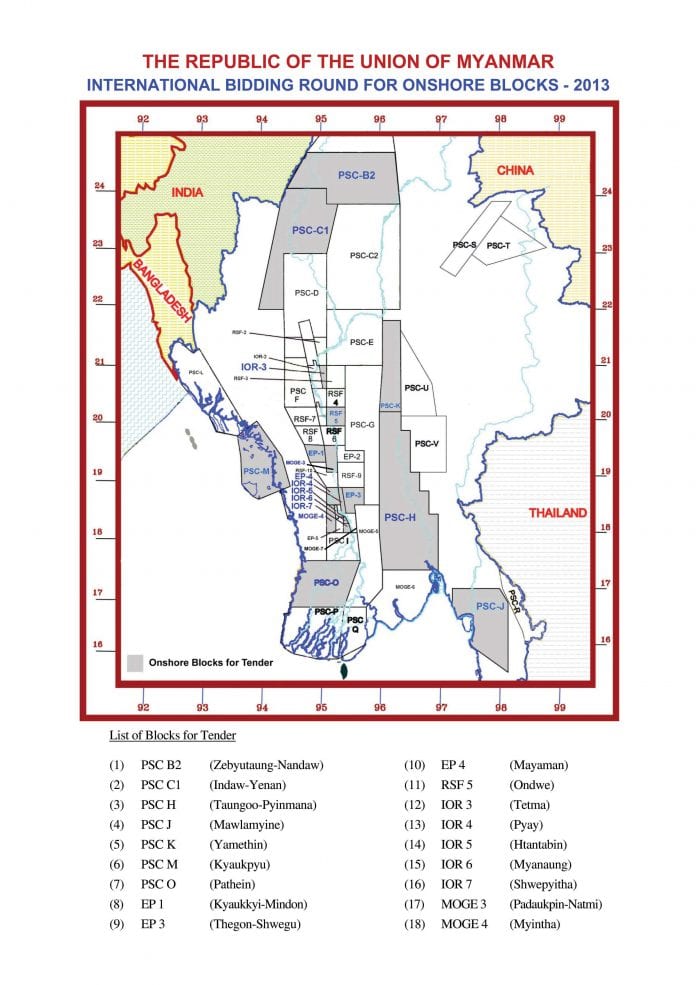 The Ministry of Energy (MOE) has announced 10 foreign companies as winners of tenders to explore 16 onshore oil and gas blocks in Myanmar, according an official announcement.

The firms will enter into joint ventures with the state-owned Myanmar Oil and Gas Enterprise (MOGE).

According to the standard terms of onshore production sharing contracts (PSC) posted on the MOE’s website, companies will have to give MOGE at least 60 percent of profits after they have recovered the expenses of exploration. They will also pay 12.5 percent in royalties, as well as taxes on their own profits.

Companies will have to sell at least 20 percent of crude oil and 25 percent of natural gas produced to the domestic market at a 10 percent discount from the market price, according to the terms.

Myanmar plans to adjust certain terms in its PSCs to make it more attractive to foreign investment such as reducing the income tax rate from 30 percent to 25 percent and extend an existing three-year tax holiday to five years. Existing PSCs stipulate a three-year exploration period followed by 20 years for production.

In January, MOE invited bids for a total of 18 onshore blocks. The ministry’s announcement said 26 companies submitted a total of 54 bids in the competitive tender.

Only two blocks from the 18 were not awarded, PSC M and IOR 3, for lack of bids. The ministry plans to invite bids for the two remaining blocks but details have not been revealed yet.

Thirteen of the 16 contracts were production-sharing deals and the rest were improved petroleum recovery (IPR) contracts. IPR is a generic term used for advanced techniques for increasing the amount of crude oil that can be extracted from an oil field.

“The tender evaluation team led by the deputy minister scrutinised and gave a score to final proposals according to the selection criteria such as exploration period, work schedules and expenses to be expended, production share ratios, experience of company, and signature bonus,” the MOE said in a statement.

Another round of bidding for 11 shallow-water and 19 deepwater offshore oil and gas exploration blocks is also underway and the winners are expected to be announced early next year.

Edwin Vanderbruggen, partner at law firm VDB Loi, said there are significant takeaways from the onshore awards, which may shed light onto the upcoming offshore round.

“Existing players such as PTTEP, Petronas and MPRL have an edge over the newcomers. That is not a matter of policy from the ministry. We think it is simply easier for contractors that already know Myanmar to propose a more aggressive bid. They are not troubled by as much uncertainty as newcomers are. We may see this again with the offshore round.”

For the first time in Myanmar, the winners would be required to perform Environment Impact Assessments before final approval from the country’s investment commission.

With a total of $14.37 billion from 115 projects, the oil and gas sector has attracted the second-largest share of total foreign investment in Myanmar, accounting for 33.46 percent. According to official figures, there are 53 onshore and 48 offshore blocks operating with foreign investment.

Proceeds from the sale of gas are expected to climb later this fiscal year following the start of operations of a pipeline from western Rakhine state on the Bay of Bengal to China in May.