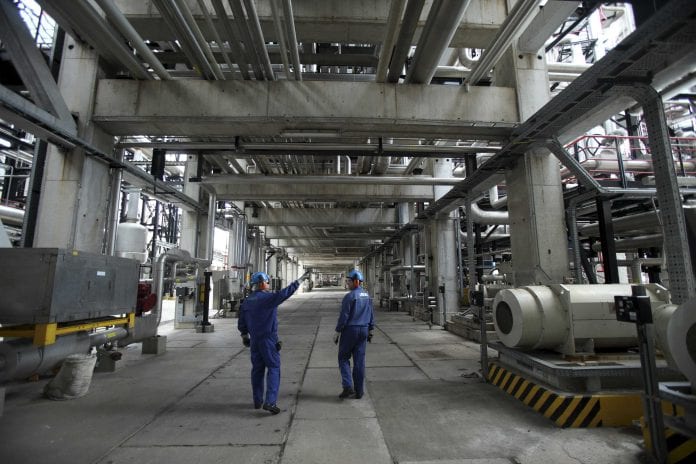 Guangdong Zhenrong Energy Co, a major Chinese bulk commodity trader, expects the country’s “One Belt One Road” strategy to help boost its overseas investments, which in its case includes a planned massive oil refinery in Myanmar.

The country’s New Silk Road Economic Belt and the 21st Century Maritime Silk Road strategies were launched in 2013 to further open up to the rest of the world and speed up infrastructure connectivity in the region.

The proposed Myanmar refinery, with an expected annual processing capacity of 5 million tonnes of crude oil, has been submitted by the Guangdong provincial government to the State Council under the strategy, said Cui Yi, director general of Zhenrong Energy’s refining and petrochemical department.

He said the company also expects to benefit from policies within the strategy to develop other overseas petrochemical industrial parks.

Zhenrong Energy received the go-ahead for the $2.9 billion Myanmar project from the National Development and Reform Commission in November and is currently applying for state approval from the authorities in Myanmar.

Myanmar’s laws on foreign investment were amended in August last year and now require participation in any new petrochemical project by its own Ministry of Energy. Myanmar Economic Holdings Ltd and Myanmar’s Htoo Group of Companies are already joint venture partners in the project.

Located in the Dawei special economic zone in southern Myanmar, the complex will become the largest refinery in the country when completed, Cui said, and is expected to play a key part in the raising of professional standards in the country’s petrochemicals industry.

Its facilities will include the construction of a 150,000-tonne crude oil dock, two refined oil docks, warehousing and logistics facilities, a power plant, and a network of gas, and liquefied petroleum gas stations.

Products from the refinery will mainly satisfy the Myanmar market, with the surplus to be exported.

A memorandum of understanding on the project was signed the following year with an environmental assessment then carried out in 2012, a year before the country’s environmental protection law was passed.

The refinery is expected to adopt China’s national IV environmental standards, the equivalent of the Euro IV standard, Cui said.

To assure local people about its environmental commitment to the project, the company invited a group of around 30 Myanmar villagers, monks and journalists to tour an oil refinery in Luoyang, Henan province, and oil exporting facilities in Guangdong in 2013.

In May last year, 1,370 villagers signed a letter in support of the refinery project, which was handed in to the country’s president’s office, the energy ministry and local governments.

“Although the investment environment in Myanmar has appeared to be unstable over the past two years – which slowed the pace by some investors – the reform and opening-up in Myanmar is accelerating,” Cui said.

“The market is underdeveloped but still has a positive outlook and offers considerable opportunities. Although some risks exist, it is attracting increasing numbers of foreign investors.”

Xiao Yaofei, a professor with the School of Economics and Trade, Guangdong University of Foreign Studies, said China’s “One Belt One Road” strategy, which is emphasising future infrastructure connectivity with various countries, is expected to lay the foundations for foreign investment by Chinese firms.

Xiao said Zhenrong Energy’s Myanmar project should also pave the way for other petrochemical-related investments by other Chinese firms, such as those engaged in chemicals manufacturing, for instance, and its support industries.

Founded in 2002, Zhenrong Energy generated 105.2 billion yuan ($16.8 billion) in revenue in 2013, including 65.2 billion yuan from international trade, ranking 139 among the top 500 Chinese companies. It is jointly owned by the State-owned Zhuhai Zhenrong Corp, one of the country’s largest oil traders.

As the global refined oil trading sector becomes increasingly competitive, the company has placed overseas investment at its core and aims to become one of the world’s top 500 multinationals in the next three to five years. (China Daily)