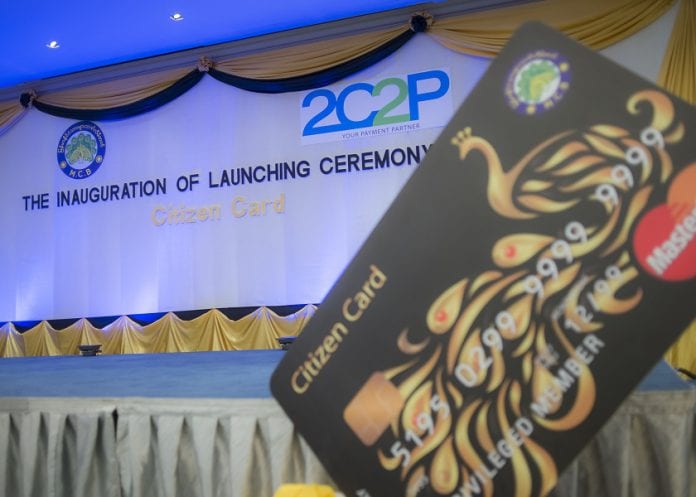 The card comes with an optional smartphone application allowing cardholders to manage transactions with real-time monitoring and online support on both iOS and Android platforms.

“Targeted at the retail, and travel and tourism sectors, Citizen Card will facilitate both physical and online shopping,” Aung Kyaw Moe, Group CEO of 2C2P, said.

“It will also be of use to Myanmar tourists when they travel overseas, as they can enjoy special benefits and privileges at destinations such as Thailand and Singapore, with a number of partner merchants in the airline, food and beverage and hospitality sectors,” he added.

However, supply of the Citizen’s Card will be limited to 5,000 units, 2C2P said.

Citizen Card can be obtained at any MCB branch in Myanmar. It is also available via the MCB website by filling out an online form.

Cardholders will get special benefits with merchant partners, in addition to waived sign-up fees, 2C2P said. Existing cardholders can add value to their Citizen Card at any MCB outlet, with more top up options rolling out this year.

U Myint Win, managing director of MCB, said, “Myanmar is on course to boom over the subsequent years. Within the last two years, the country has seen its first ATM, the first debit card and the first internationally accepted card. Building on this momentum, we are pleased to partner with 2C2P and launch MCB’s very first prepaid card, which will help support the imminent growth in Myanmar e-commerce.”