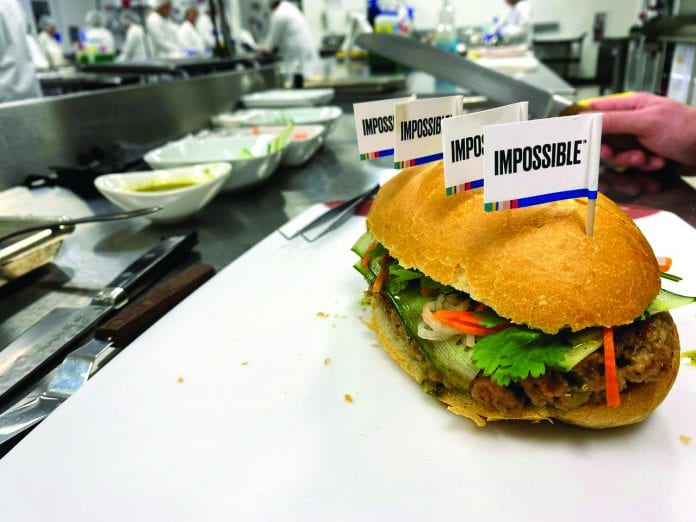 Impossible Foods Inc. on January 6 launched a plant-based sausage patty that will be tested in 139 Burger King restaurants later this month, entering a category dominated by rival Beyond Meat.
Silicon Valley-based Impossible Foods, which supplies plant-based Whopper patties to Burger King in the United States, said it would begin a limited trial of the Impossible Sausage in five regions including Springfield, Illinois, and Albuquerque, New Mexico. The imitation pork sausage will be sold in a toasted breakfast croissant, called the Impossible Croissan’wich, with egg and cheese.
“The number of people who are eating pork from pigs is humongous and the fraction of that market that is captured by plant-based products is tiny,” Pat Brown, the chief executive of Impossible Foods, told Reuters in a recent interview.
Pork has been the world’s most consumed meat for the past four decades, according to the U.S. Department of Agriculture. Impossible Foods also announced another imitation ground pork product on January 6, but did not disclose details about where it would be produced or sold.
The company has been called out by analysts for selling only one type of plant-based meat since 2016, when it launched its burger.
Los Angeles-based Beyond Meat has used imitation pork, chicken and beef to create products for major fast-food chains including burgers for McDonald’s, sausage patties for Dunkin Brands and chicken for Yum Brands Inc.’s KFC chain.
Competition is heating up in the exploding plant-based meat market, with dozens of new products hitting grocery stores and restaurants this year. The global alternative meat market is forecast to be worth $140 billion in the next decade, according to Barclays.
Entering China, the world’s biggest consumer of pork, is Impossible Foods’ biggest priority and the company is actively looking for partners there. Plant-based imitation pork is also likely to appeal to consumers elsewhere in Asia, where Impossible currently ships to over 450 restaurants.