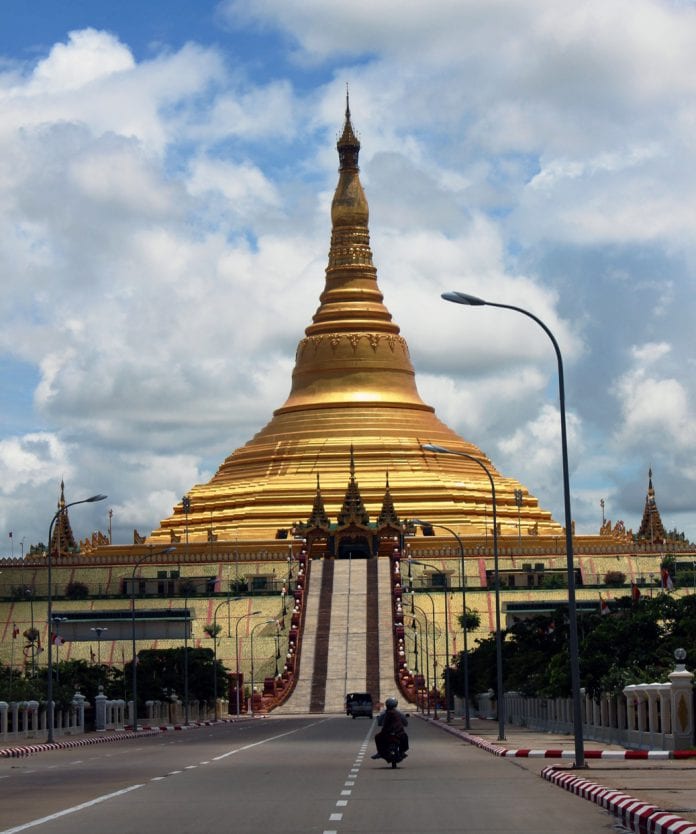 Let’s be honest, no one really goes to Nay Pyi Taw out of choice. With its vast, empty highways and perfectly manicured lawns, it is a pretty looking city but for those spending a little more time in the new capital – which is increasing as more government officials and events are hosted there – there are not a great deal of activities.
Visitors to the city often spend time inbetween meetings locked up in their hotel rooms as they are unaware that there at least some activities in the city. vHowever, as the government attempts to build Nay Pyi Taw as an international city, an increasing amount of activities have become available there.
Motorbike taxis, for around K10,000 a day, are often the best way to zip around the wide, empty streets.

Uppatasanti Pagoda
It’s easy to see where the designers of this impressive pagoda got their inspiration from. Thought to be just slightly smaller than Yangon’s Shwedagon, Uppatasanti, which translates as ‘Peace Pagoda’ was opened in 2009 and on one side of the pagoda, Royal White Elephants are kept and it offers impressive views of the nearby hills surrounding the capital.

Nay Pyi Taw Zoological Gardens
Opened in 2008, the animals here were almost all taken from the equivalent zoo in Yangon.
In December 2009, it was home to 634 animals of 89 species, which included crocodiles, tigers, deer, leopards, white tigers and kangaroo. Additionally, there is an air-conditioned penguin house, although it would be interesting to know how the penguins cope if a powercut occurs.

Pyidaungsu Hluttaw
The country’s equivalent of the White House is rumoured to have cost upwards of $1 billion. From the road – an absurd 20-lane, empty highway – you are not able to see a great deal but it’s worth checking out. The complex it is located on is a huge, sprawling site that takes at least 30 minutes to drive around.

Myoma Market
It may seem like the city is bereft of street life, however near to the bus station there is a lively market, that sells your usual necessary items, mixed in with tat. It’s nothing special when compared to other markets, but makes a welcome change from the sterility of hotel lobbies.

Wunna Theikdi Stadium
In December, Myanmar will host the 27th Southeast Asia Games with the majority of events being hosted in Nay Pyi Taw. For this, the organisers have built an impressive complex of stadiums, none more so than the Wunna Theikdi Stadium, an impressive multi-use stadium that wouldn’t look out of place in the English Premier League. It’s possible to walk in too and have a casual walk around.