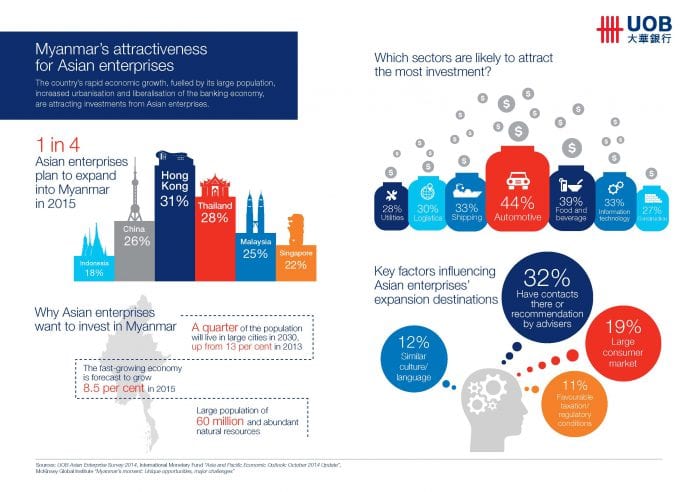 One in four Asian enterprises plan to expand into Myanmar this year, a survey revealed, making Asia’s nascent emerging market one of the top investment destinations in the region.

One-third of businesses from Hong Kong (31 percent) said they would expand into Myanmar in 2015, followed by those in Thailand (28 percent), mainland China (26 percent), Malaysia (25 percent) and Singapore (21 percent), according to the United Overseas Bank (UOB) Asian Enterprise Survey 2014.

According to the survey, businesses in the automotive (44 percent), food and beverage (39 percent), information technology (33 percent), shipping (33 percent) and logistics (30 percent) sectors were among the top companies looking to expand into Myanmar to fuel their next stage of growth.

With a population of 60 million and abundant untapped natural resources, Myanmar is becoming a rather attractive investment destination for long-term investors interested in the country’s economic transition initiated by the semi-civilian government in 2011.

The McKinsey Global Institute in 2013 estimated that Myanmar needs a total investment of $650 billion by 2030 to support its growth potential of quadrupling its economy, with $320 million in infrastructure alone.

Ian Wong, managing director, Group Strategy and International Management, UOB Group, said, “To build a strong foundation for the country’s long-term economic growth, Myanmar will need to attract ongoing investment in infrastructure, manufacturing, communication and education. Companies specialising in these areas have an opportunity to be part of Myanmar’s economic transformation by investing early.”

UOB said another factor facilitating the increasing investment into Myanmar is the liberalisation of the local banking sector. The awarding of foreign banking licences to nine international banks last year, including UOB, is expected to give foreign investors access to a wider range of financial solutions.

Wong said that UOB has seen strong interest from the bank’s clients to invest in Myanmar. “The opening of our Yangon branch will give us the opportunity to work more closely with the Central Bank of Myanmar and local banks to provide our regional clients with local and cross-border banking solutions as they invest and expand their operations in Myanmar.”