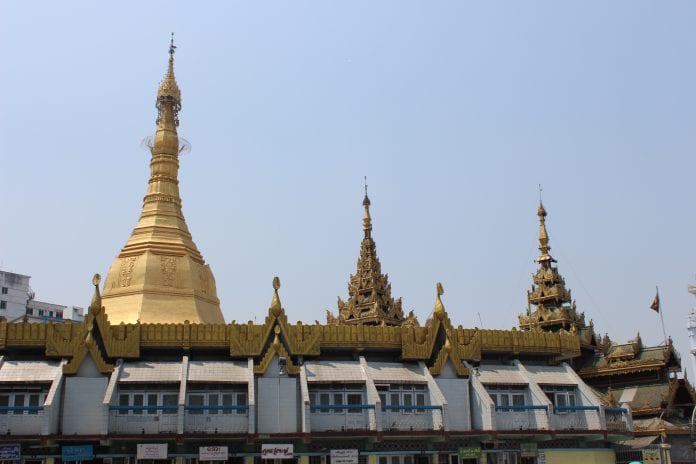 As the dastardly rainy season nears its end, there is time again to enjoy the country’s great outdoors.
For many, that will mean weekend plans to get out of the city, perhaps to the beaches to the west or the more lush greenery to the east. However, for those with a little less time, or desire, to get out of Yangon, there are plenty of options within the city’s limits.
With its gridlocked roads, potholed pavements and often irritating touts and money changers, there are a large number of Yangon residents not particularly keen on venturing to the downtown area. That’s hardly surprising, but spend a little time in the area and there are plenty of options to keep the visitor entertained.
The grid-like downtown area makes it an easy area to navigate and with the aforementioned traffic clogging the streets so much, traveling by foot is by far the best option.
What other cities around the world have a shining golden pagoda as their centrepoint? The Sule Pagoda, located in the physical heart of the city, might be lesser-known than nearby Shwedagon, but it’s still an impressive spot to begin.
It is unique in that it is octagonal in shape and it is believed that somewhere within the pagoda lies a relic of the Buddha’s hair. According to legend, the pagoda marks the site where King Okkalapa held meetings to build the Shwedagon. “Su Wei” is a Myanmar term meaning something similar to ‘meeting’, this being later corrupted to “Su Le.”
When the British conquered Myanmar in 1886, they established Yangon as the capital, and made Sule Pagoda its centrepoint. Inside, it is a calm tranquil place to observe Buddhist life and offers a welcome break to the general pandemonium outside on the streets.
On the north-eastern side of the pagoda lies the City Hall, which now acts as the office of the city’s administrative office, the Yangon City Development Committee (YCDC). Designed by renowned Burmese architect U Tin, who also designed the Yangon Central Railway Station, the building was previously a sand-coloured structure, but has since been repainted to the impressive white that it sports today. It’s a striking building that dominates an already famous part of the city.
To the south lies Mahabandoola Park, a relaxing place to sit and while away a few hours. The park itself is dominated by the impressive Independence Monument, a white obelisk that replaced a Queen Victoria bust when the country gained its independence from the British in 1948.
To the east of the park, down the narrow, lively Mahabandoola Park street sits the old High Court Building. Dotted around the city are a number of impressive red-brick structures that were built during the country’s colonial rule, other examples include The Secratariat building on Bo Aung Kyaw road as well as Custom House on Strand road. The High Court, which was used as the country’s Supreme Court until it was relocated to the new capital Nay Pyi Taw in 2006, is now off-limits to camera-wielding foreigners but remains as an impressive reminder to the country’s colonial past.
Further south and it’s the city’s street-life, rather than the architecture, that becomes captivating. Duck, weave and side-step through the narrow streets and you are treated to a vibrant street life, where men in tattered longyis and ripped vests lounge around in plastic chairs sipping la phet yee (sweet tea), reading the day’s paper. The architecture down these little-known streets is impressive too, an eclectic mix of Chinese or Muslim buildings mixed in with some more modern additions to Yangon’s skyline.
One such example is 37th Street, in particular between Merchant and Mahabandoola roads. On the left side, venturing north, book stalls covered by blue tarpaulin line the street. Here and there are dotted a few English language books, but the majority are titles in the Burmese language and each inch of pavement here is filled with locals flicking through books.
On the right side is Bagan Bookstore. The store has the most impressive collection of books you are likely to find in the country. In previous times, some titles such as Aung San Suu Kyi’s “Freedom From Fear” and Bertil Lintner’s “Outrage” would not even have been allowed to be in the country, but now they sit alongside books by Dr Maung Maung, a government-aligned historian and a close ally of former dictator Ne Win.
Pansodan street lies just a block from here. This wide avenue would have been one of the key streets during the city’s British rule and the streets are again lined with impressive buildings from that era.
You don’t have to agree with everything the British did during their rule, or even any of it, but it’s difficult to deny that they built some of the most majestic looking buildings in the region. Many of the buildings have since fallen into bad states of disrepair, although some continue to be maintained. The offices of the Yangon Heritage Trust, a group working hard to save Yangon’s most impressive buildings – ranging from mosques, to schools, to temples, sit on the left hand side as you make your way south along the river.
At Strand road, the Myanmar Port Authority building dominates one corner, while a striking blue building, now used for law offices, sits on the other.
The Strand road continues to be a busy street where more impressive buildings sit on the north side, and local life maintains as it would have done decades ago on the south. Down a narrow alley lies a local market which sits in marked contrast to the Strand Hotel on the opposite side of the road, a perfect place to finish the tour with a drink.