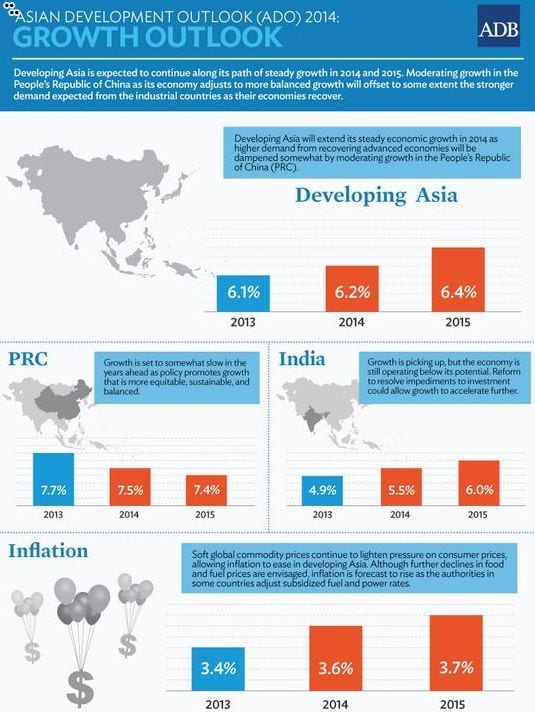 Developing Asia will extend its steady economic growth in 2014 as higher demand from recovering advanced economies will be dampened somewhat by moderating growth in China, a new Asian Development Bank (ADB) report said.

“Risks to the outlook have eased compared to the recent past, and policy makers in the region can manage them. At the same time, countries should continue to make every effort to pursue sound macroeconomic policies and needed structural reforms.”

The Manila-based lender said demand for Asia’s output is expected to grow as the recovery in the major industrial economies gains momentum. Combined GDP growth in the United States, the euro area, and Japan is expected to pick up to 1.9 percent in 2014 from 1 percent in 2013 before strengthening further to 2.2 percent in 2015, according to ADB.

The improvement in demand, ADB said, will be offset somewhat by moderating growth in China where the economy slowed to 7.7 percent in 2013 on impacts from tightened credit growth, pared industrial overcapacity, deepening local government debt, rising wages, currency appreciation, and the continuing shift in the government’s development priorities away from quantity toward quality. These factors persist and China growth is forecast to slow to 7.5 percent in 2014 and 7.4 percent in 2015, ADB said.

The lender said while risks to the outlook have eased, three areas warrant close monitoring. First, if efforts in China to curb credit expansion are too abrupt and excessively undermine growth, a deeper slowdown could drag down prospects for its trade partners. Second, data on the recovery in the major industrial economies have been mixed; pointing to the possibility that demand for the region’s goods from these countries may be softer than envisaged. And third, a further shock to global financial markets from changes in US monetary policy cannot be ruled out.

Across the subregions, East Asia will see its growth trend flatten as growth moderates in China. East Asia grew by 6.7 percent in 2013, a slight uptick from 2012, and is expected to maintain that rate into 2014 and 2015. The slower growth in China will offset upswings in the newly industrialised economies of the Republic of Korea; Hong Kong, China; and Taipei, China. As policies tighten to curb inflation, growth in Mongolia will moderate in 2014 and remain broadly stable in 2015. Inflation in East Asia hit a 4-year low of 2.4 percent in 2013 and will remain manageable at 2.5 percent in 2014 and 2.9 percent in 2015.

Although growth in South Asia is inching up, it remained the slowest growing subregion, with GDP expanding by 4.8 percent in 2013. Moderation in India had an outsized impact on the subregional average. Growth is forecast to improve to 5.3 percent in 2014 and 5.8 percent in 2015, with projected recovery in India to 5.5 percent and 6.0 percent, assuming the implementation of long-delayed structural reforms.

Growth patterns in Southeast Asia will be dominated by country factors. Subregional GDP decelerated to 5.0 percent in 2013 as soft export markets and slowdowns affected Indonesia, Thailand, and Malaysia. Growth in Indonesia, the biggest of these economies, was dampened by policies the government adopted to subdue inflation after it sharply raised fuel prices. Subregional growth is forecast to be similar in 2014, as gains from better export markets are offset by moderating domestic demand. The outlook improves to 5.4 percent in 2015, with growth picking up in Indonesia after inflation ebbs, and Thailand’s economy rebounding if political disruption recedes.