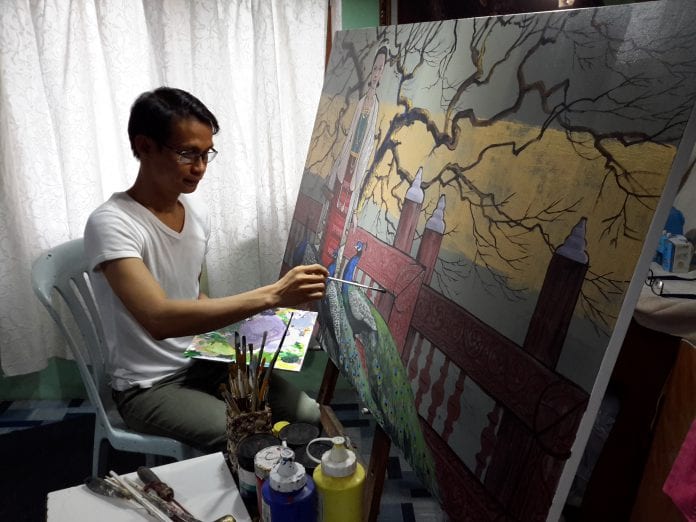 With Myanmar opening up, the art industry has been billed as an emerging market, but the potential for growth of the market is marked with uncertainty. In order to keep up with global art trends, there is an urgent need for the development of the copyrights law and arts education, industry insiders say.

“The prices in the art industry has been increasing steadily for several decades. Some pieces’ value have tripled since the times of censorship [before 2011],” U Aung Soe Min, the owner of Pansodan Gallery, told Myanmar Business Today, predicting further increase in the coming years.

Gill Pattison, the owner of River Gallery, one of the country’s most prominent galleries, said that for some particular artists the prices have appreciated a lot, but for others there is a general consistency.

“To call the art industry an emerging market would depend mostly on the skills and creativity of the upcoming generation of artists. The market still needs further exposure and education, with more galleries to exhibit the available pieces,” she told Myanmar Business Today.

Pattison said, “On the supply side, we have seen an expansion of types of arts, conceptual art, installations, videos, performances and others have blossomed and they can now be publicised. Performance arts were here before but they were done behind closed doors, where the most biting criticism and satires were shown.

“On the demand side, as more people visit Myanmar the [art] market is growing, and in response, lots of galleries have opened up and some artists have turned their studios into galleries as well. The gallery scene is much more interesting than before. Those things as a whole has stimulated the art market, as demand increases and artists feel freer.”

During the socialist era, artists mostly focused on religious paintings of pagodas or posters of movies and other illustrations. “To survive as a fulltime artist was close to impossible,” U Zay Yar Aye, one prominent Myanmar artist, said. At that time, the number of foreigners entering the country were limited, so only certain artists survived with the help of some rare expats, foreign ambassadors or famous actors who were interested in art. The proportion of income Myanmar people spent on art was much smaller as the market was dependent on interest rather than necessity.

“But after 1988, three or four galleries had started as more foreigners entered the country. The sales increased slowly up until 1996. Then the art industry boomed so much that the gallery doors had to be closed because of the rush of the foreigners, and we distributed stickers, either yellow or red, which represented reservation or buying respectively. By the end of the first day of an exhibition, at least 40 to 60 pieces would be sold.” However, the industry went into a lull after some years later even with the increasing number of foreigners coming and living in the country. “The prices have gone up now, but we haven’t really achieved the volume of sales from that era,” he said.

One of the most draconian laws had been the censorship law, which even prohibited the artists from using bright red shades, images of smoking or peacock (symbol of the pro-democracy party National League for Democracy (NLD). Censorship lasted from 1962 until 2011, when the government abolished the Censorship Board.

According to Pattison, even after the censorship was lifted, most galleries still invited the Board to review an exhibition before the pieces were shown, as the galleries were still cautious. But gradually, the invitations from the galleries and the request from the boards stopped.

“The first wave of freedom from the censorship came with the paintings of Daw Aung San Suu Kyi, with the depiction of reverence and fondness of her. But surprisingly, the artists still took a cautious view of the subjects they painted. They were not confident that the reform process would continue. There have been a lot of false hope in the past, and they didn’t want to later find out that the reforms have gone reverse.”

Also, there was a general collective desire to be forward looking with no sense of retribution or blame. That meant that the artists did not gravitate towards controversial subjects, and did not paint anything that would be critical about the past regime.

But, there has been an increase in personal arts. The artists have expressed more of their own reactions to situations. They don’t just want to produce decorative pieces; they want to show things that matter to them. One of the most obvious examples is the artist, U Htein Lin, who was a political prisoner for six years. While he was in prison, he continued to create artworks through paints smuggled in and using white prison longyis as his canvas. He left for the UK and came back when the reforms had started. He continued the trend with works such as “The show of hands”, where he made plaster cast of the hands of people who had gone to prison during the reform movements. While the cast had been drying, the former prisoners shared their stories and U Htein Lin recorded the videos of them sharing their experiences. “Art movements, such as this, would not have been allowed back then,” Pattison said.

Clash of preferences: generations and identity

The preference in the types of art varies between the older generation and the youth, and between the locals and the foreigners. Even then, the basic marketing strategy remains special invites and spreading news through the media. The rest depends on the interest of the audience on the type of the art shows.

“As the country is developing, the number of collectors is also increasing. We now see younger collectors in their twenties as well because their income has increased,” she said.

However, on the other hand, the local collectors are so few that one can count them on the fingers, said U Zay Yar Aye.

Among foreigners, Pattison said there are different groups of buyers. “Some of the visitors are serious art collectors who have background information of who are the established artists in Myanmar and seek those artists in Myanmar. But they are quite a small group. The larger group is the visitors that generally collect art that touch their mind, they are more open to different types of artists.”

The prices of paintings are mostly determined by the size, with specific price per square feet. According to Lynn Whut Hmone, the prices of the pieces depends on the artists, and the galleries have to decide if they can find investors with the given prices.

The galleries get commissions between 30 and 40 percent, which is a lot lower than the 60-70 percent commission that galleries take in other countries, said U Aung Soe Min.

According to U Zay Yar Aye’s experience, the sales are still highly dependent on foreigners, including embassies. Prices of paintings in Myanmar are much lower compared to those in other countries, to the extent where visitors assume that making the border of the paintings in their own country will cost more than the piece itself.

In the international market, the industry is sponsored through contracts, where they demand up to 10 pieces from an artist in one month. But here, most artists have to promote and sustain him or herself as hiring a manager is too costly.

Myanmar’s art market is becoming bigger with different galleries targeting different kinds of buyers. But now the buyers would rather find artists at their studios because the prices are lower as they don’t have to give commissions. Also, the price depends on the relationship of the artist and investor.

Not many laws on the copyrights in art have been established, but in case of plagiarism, the offender can be sued. As for now, the market runs with an understanding between the artists as not to copy each other, U Aung Soe Min said.

According to U Zay Yar Aye, plagiarism cases are hard to be resolved. If a painting becomes famous, it is replicated and sold at a much lower price, from about $2,000 to $80, hurting the original artist to a huge extent. In these cases, the council of artists has to come forward but the action is rather limited towards warning, and the process stops before reaching the court.

“In Bogyoke market, souvenir market has its own separate category where the artists cannot take much action. But these pieces cannot be considered art, but only handicrafts,” U Aung Soe Min said.

Pattison said, “One thing that hasn’t really changed much in the art industry is that there is not much support for arts and arts education here. We have two universities [in Yangon] – the States School of Fine Arts and the University of Culture. They are not taking in any more students and the numbers are shirking. This does not bode well for the future, as less people are getting formal training.”

Although there is a bit more scholarships and a bit more written about the Myanmar art scene, which is important for the development of the art scene, she said.

“It is important that you have art critics, academics and scholars publishing articles on the internet and in books. There are more artists travelling abroad, with more art shows and residencies, and they are being invited as lectures at workshops. While some artists have made their way internationally, more exposure is needed.”

According to U Zay Yar Aye, due to the limited exposure, the art industry seemed to be stunted at paintings of flowers, scenery, market and monks, where different individuals are working on the same subject. “Foreign artists say [our] art seems to be 100 years behind where other artists have moved away from the canvases towards other medium.”

U Zay Yar Aye said arts education in universities in Myanmar has to start from the basics with introduction to type of lines, shapes and forms because arts is not taught at elementary or primary levels at school. This limits the ability to foster creativity, he added.

He said there are several industries such as creative designing and publishing that need artists, but what Myanmar is seeing right now is the lack of artistic talents to fulfil the needs of those industries.

“There is need for more art-based activities, which have increased over the past eight years but they are mostly sponsored by private investors. Some foreign countries have also shown support through sponsorships or scholarships.

“The awareness about art has increased, and at the moment Myanmar people put paintings at their homes as a status symbol. But most importantly, there needs to be political stability and development to flourish the industry.”