After Decades of Decay, Myanmar Bets on Thilawa to Lead Industry Boom 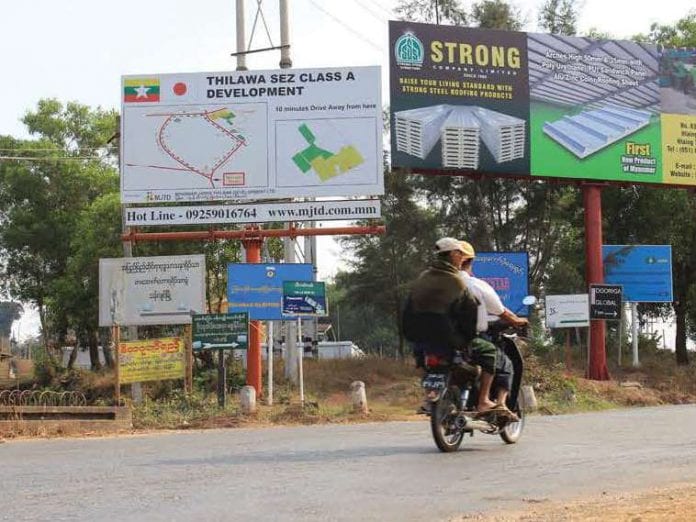 From the banks of the Yangon River rises Myanmar’s great economic hope, a $1.5 billion manufacturing complex designed to lure investment and help the impoverished country compete in the global marketplace.

The first phase of the 2,400-hectare (5900-acre) Thilawa Special Economic Zone (SEZ), an hour from the commercial capital Yangon, is only months away from completion, and plans to host some 100 factories employing 50,000 people are being fast-tracked.

Corruption, sanctions and scant investment under a half-century of military dictatorship has left Myanmar with a labour surplus, and the reformist government is hoping to capitalise on its workforce to give it a competitive edge.

A diverse range of manufacturers from Suzuki Motor Corp to a soft toys factory called “Cute Myanmar” are getting ready to set up at Thilawa.

The project is being driven by Japan’s Mitsubishi Corp, Marubeni Corp and Sumitomo Corp, with the backing of the four-year-old government.

“The Myanmar government is serious,” said Takashi Yanai, president of Myanmar-Japan Thilawa Development (MJTD), which has a 49 percent stake in the SEZ. “They want to change the old style.”

That style helped fill the pockets of generals but scared off investors, who watched Myanmar’s economy wilt while neighbours China, India and Thailand grew apace.

Now, managed by a semi-civilian government, Myanmar has one of the world’s fastest growing economies.

Developers hope the Thilawa project will provide a further boost to foreign direct investment, which last fiscal year amounted to $8.1 billion – about 25 times the $329.6 million received in 2009/2010 before the military ceded power.

Myanmar has two other SEZs on the way, in Dawai, a southern port complex abutting Thailand and Kyaukpyu on its west coast at the Bay of Bengal.

But the government has made Thilawa the top priority. New roads have been built, investment permits have been issued in as little as three weeks, and there a plans to expand a nearby port. Of the 41 firms that have so far signed up, 21 are from Japan.

The SEZ is currently connected to Myanmar’s notoriously unreliable power grid, but the government has pledged to build a 50 megawatt power plant nearby. Sumitomo announced last month it had won a contract to build the 5 billion yen ($41.59 million) gas-fired plant, and it will be fully operational by July 2016.

Koyo Radiator Company, a unit of Japanese-owned Koyo Group, chose Thilawa due to rising costs at its affiliate plants in nearby countries.

“Labour costs in both Indonesia and China have dramatically increased, which has resulted in a tough situation in terms of company profit margins,” said Takuma Ejiri, managing director of Koyorad Myanmar, a member of the Koyo Group.

Aware of the cost-saving advantages presented by its workforce, the government must balance cheap labour against fair pay.

The head of parliament has recommended the civil servant minimum of K3,000 ($2.75) per day be the standard for industry also. That would compare with about $9.14 in Thailand and $6.35 in Vietnam.

But the zone has its critics. Mekong Watch, a Tokyo-based watchdog that scrutinises regional investments, says villagers have been displaced without adequate compensation.

Kyaw Naing Oo was among those relocated to a small community nearby that residents call Japan New Quarter. He was given a small amount of money and a wooden house on a 25 by 50-foot plot of land in return for his two acres of farmland. He hopes to work at Thilawa, which has offered training and jobs to those who moved.

“If I get a job there it will be a better life,” he said. “But the way I feel now, I prefer the other place.” (Reuters)