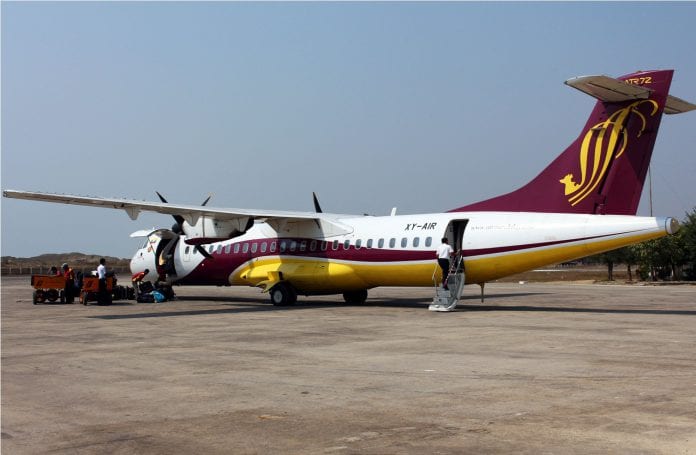 Local carrier Air Mandalay said it has signed a deal with American aircraft manufacturer Boeing to work together in its fleet renewal efforts.

Boeing will assist Air Mandalay Ltd (AML) with its attempts to procure the US firm’s flagship 737 airplanes through leasing channels in support of the airline’s expansion plan, the Yangon-based airline said in a statement.

“Collaboration of future expansion of Air Mandalay leading to leasing of Boeing 737NG aircraft for short term and committing purchase of Boeing 737NG or 737MAX if conditions permit in the future,” Sai Kham, a spokesperson for Air Mandalay, told Myanmar Business Today.

“Basically, AML has chosen Boeing as its long term strategy partner,” he added.

The 737 family is the best-selling commercial jetliner in history, with orders for over 12,000 airplanes through October from more than 280 customers. More than 8,000 737s have been delivered, according to Boeing.

When asked about future expansion, Sai Kham said it “depends on market and economic growth of both Myanmar and AML.”

“Most likely scenario is leasing of Boeing 737NG. We are confident that our chosen path will be soon ordering Boeing 737MAX in future,” he said.

Skip Boyce, President, Boeing Southeast Asia, said, “The Next-Generation 737 aircraft will provide Air Mandalay with market-leading efficiency, reliability and passenger comfort, allowing the airline to continue to prosper and grow in the region.”

Air Mandalay Ltd is a private joint venture company that was incorporated on October 6, 1994 to operate as Myanmar’s first privately owned airline. The airline flies to all major domestic destinations and one regional link, to Chiang Mai in northern Thailand. It also offers air charter services to destinations within the country and the region.

“This memorandum is an important step in our growth strategy,” said Adam Htoon, principal of Air Mandalay.

The move comes as Myanmar’s aviation industry goes through a period of boom thanks to rising tourist arrivals to the country that opened up to the world about four years ago.

“Due to the growth of tourism and business investment in Myanmar, air transportation has become an increasingly important contributor to both the nation’s economic growth and its infrastructure development,” Htoon said.

“It boosts local travel, offers human resource development and job opportunities in the aviation industry to local communities. The country is looking to position itself as a major tourism destination capable of handling an increasing number of foreign visitors. The 737s will provide us with capabilities to support this critical national growth strategy,” he added.

Myanmar is set to receive 3 million tourists, according to the Ministry of Hotels and Tourism, while the figure crossed two million last year. In 2010, Myanmar received only 300,000 tourists.

Since Myanmar’s opening, many major American companies such as General Motors, Ford, Coca-Cola and Pepsi have entered the country to tap the emerging economy. US consumer good company Colgate-Palmolive last month acquired a local brand for about $100 million, while power solutions provider APR Energy clinched a deal to build a 100MW power plant in Mandalay earlier this year.

“The US government encourages responsible trade and investment by American companies that will support economic development, and improve the safety, security, and standard of living of the people of this country,” said Derek J Mitchell, US Ambassador to Myanmar, who witnessed the signing.

“I am pleased by the kind of long-term commercial partnership that Air Mandalay and Boeing are committing to … which serves as a model of constructive bilateral cooperation and can play a critical role in supporting broad-based, sustainable development here.”

In July, Air Mandalay signed an aircraft purchase agreement with Mitsubishi Aircraft for an order of six MRJ90s with a purchase option for an additional four. Deliveries of the Mitsubishi Regional Jet (MRJ), Japan’s next-generation regional aircraft, are scheduled to start in 2018, Air Mandalay said.

Sai Kham said the routes for the Boeing 737s are “yet to be identified” and will be decided according to the carrier’s network analysis, which will be done together with Boeing.

“We are trying to compliment Myanmar’s aviation industry. We have to offer more seats, more destinations and be more competitive to cater to ASEAN Open Skies 2015.”