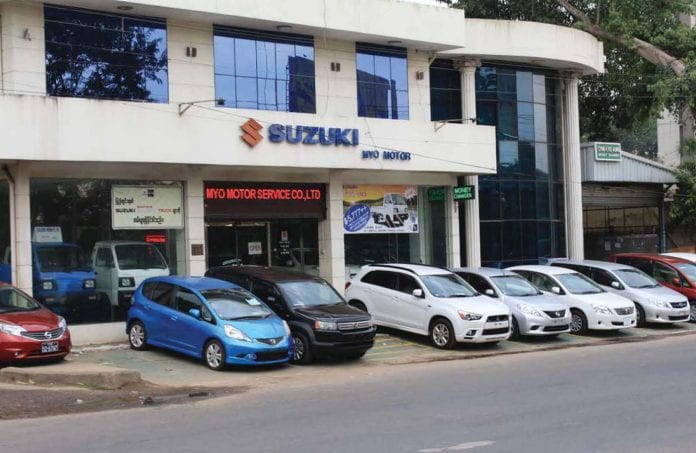 Excluding taxis, cars using compressed natural gas (CNG) and cars that are hybrid comprise only 1 percent of new sales in the local automobile market, according to a report by motors.com.mm.

The report, which is based on data collected by the automobile website, over the past two and a half years shows that 81 percent of private cars use petrol and another 18 percent use diesel.

“We combined the data from over 220 car showrooms in Yangon, Mandalay and Naypyitaw, as well as data from our website, comprising over 10,000 vehicles,” Phyo Pyae Sone, a spokesperson from motors.com.mm, told Myanmar Business Today.

Vehicles covered in the survey were put in different categories such as private cars, commercial vehicles and passenger vehicles such as buses.

Among commercial vehicles, 79 percent use diesel and 20 percent use petrol, while vehicles that use alternative fuels such as CNG make up only one percent of the market.

“Petrol-powered cars, worth between K10 to K15 million, are the most affordable to many people and are usually traded. CNG powered cars can only be imported with a CNG permit. Without this permit, it can be difficult to register the car. As for hybrid and electric cars, they need to be re-tuned to adapt to Myanmar, and the government hasn’t provided support facilities such as recharge stations,” said U Aung Naing Tun, director of Sakura Auto Auction Centre.

In other countries, governments encourage the production and use of hybrid and electric vehicles, which are more environmentally friendly.

The number of hybrid and electric vehicles worldwide is forecast to be 80.4 million in 2015, according to statista.com.