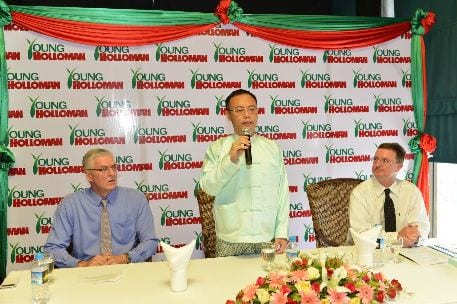 The two firms have jointly invested $200 million in the joint venture entity, which will build two cement batching plants in Yangon, and later on expand their presence in construction, and oil and gas sectors, company officials said, claiming this as the first JV investment in construction and energy sector in the country between an American and Myanmar firm.

U Thiha Aung, chairman of YIG, said: “We will build two cement batching factories in Thilawa Industrial Zone and Thingangyun township.” The $100-million factories will be built within six to eight months and will use domestic raw materials, with a daily production capacity of 280 cubic metres, he said.

“With Myanmar growing at an unprecedented pace, we explored multiple options of foreign partnerships and found that Holloman shared the same insight to Myanmar’s growth. Through Young Holloman Corp we aim to expand our already diverse business and bring a new element of corporate social responsibility and health, safety and environmental standards.”

“With our experienced exploration team and our subsidiaries Hunt Drilling Pte and Pilot Pacific Solutions Pte, and with our parent Holloman Corp’s pipeline capabilities we are in a position to be a major supplier of oil and gas to the future needs of energy for the emerging Myanmar economy,” Petersen said.

The company will conduct a survey for environmental and social impact assessments in Yanan-Inntaw in Chindwin area in Sagaing region and in Taungoo-Pyinmana in Bago region, he said. YIG officials said the survey will start in 2014 and will finish within six months.

YIG has more than 6,000 local employees with offices in Myanmar, China and Singapore. Since formation, the company has grown into more than nine industries ranging from construction, real estate and hydropower services to oil and gas exploration, life and non-life insurance businesses and most recently into telecom infrastructure.

“Our business plan is centred on the continued development of the Myanmar workforce. A cornerstone of Young-Holloman’s commitment is the training of personnel. We will have a world class training program that will focus on worker safety as well as improving core skill sets.”