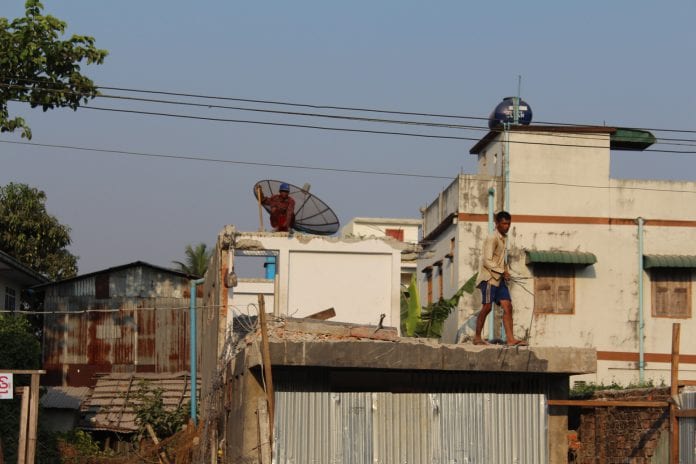 The Sule Pagoda Road in downtown Yangon is famous for its role in Myanmar’s turbulent recent history. With its golden pagoda rising at one end, it has always served as a popular gathering point for street protests.

These days the road is drawing attention as the location of some of the hottest properties in Yangon. According to local businessmen and building owners, the cost of land here has shot up to as much as $1,500 per square foot (around $16,000 per square metre). This is roughly six times the price of similar plots in the Thai capital, Bangkok.

But experts warn that in the midst of its boom, Myanmar must build resiliently, with an eye on the country’s vulnerability to natural disasters.

Since political and economic reforms were begun in November 2011 by the government of President Thein Sein, capital inflows have led to new offices, hotels and apartment complexes sprouting in the country’s largest city.

Elsewhere, new economic zones are being opened up, such as the Thilawa Industrial Zone near Yangon and the Dawei Special Economic Zone to the south, near the border with Thailand.

Still, many of those benefiting from these developments have not forgotten the devastation that can be wrought on people and property alike by natural disasters. Myanmar is extremely vulnerable to cyclones, in particular, and the government is responding with measures to mitigate their impact.

In the three decades to 2010, Myanmar experienced 27 natural disasters, which caused the deaths of over 140,000 people and affected the lives of 3.9 million, according to an analysis last year by the Myanmar Disaster Risk Reduction (DRR) Working Group.

Between 2002 and 2012, three cyclones affected over 2.6 million people, floods stranded more than half a million, and two major earthquakes affected 20,000. The single most devastating event was Cyclone Nargis in May 2008, with a death toll of 135,000.

Myanmar ranks close to the bottom of the Notre Dame-Global Adaptation Index, which measures countries’ climate vulnerability and readiness to improve resilience. This “is as much a reflection of Myanmar’s exposure to climate change as it is of the country’s low capacity to manage climate risks”, according to the DRR Working Group.

It estimated that close to 2.6 million people live in areas vulnerable to disasters such as cyclones, earthquakes, floods and droughts.

A new disaster management law was enacted in June last year, and a National Natural Disaster Preparedness Working Committee was set up under the President’s Office to coordinate disaster preparedness and mitigation work.

“They are taking this very seriously,” said Helena Mazarro, who manages disaster risk reduction for Myanmar at the UN Office for the Coordination of Humanitarian Affairs (OCHA).

Around 200 lives were reported lost, while over 140,000 people living in vulnerable regions in western Rakhine state were evacuated before the storm made landfall. The presence of UN and other humanitarian agencies that had worked with the government to raise awareness helped prepare people for the storm.

The disaster management law has been followed by a new construction code, which was introduced in March this year but is still subject to consultation. It sets standards on building safety with regard to cyclones, storms and earthquakes, and establishes a regulatory body to ensure standards are met.

“The update on the codes for building construction (takes) into account new knowledge on possible effects from earthquakes and strong winds in the country. The key question is how much these better standards really get implemented at the ground level,” said Peeranan Towashiraporn, director of the Bangkok-based Asian Disaster Preparedness Centre.

Another challenge faced by the government is the range of disasters that pose a threat. While Myanmar’s southern regions are prone to cyclones, the northern parts sit on earthquake faultlines.

UN-Habitat’s Murugesan said disaster preparedness at community level also needs reinforcement. “(At the) national level they are better prepared than before – of course, when it goes down to (the) local level, challenges remain.”

Given the lack of resources in the country, disaster preparedness programmes still need substantial foreign funding and specialised personnel, he added.

OCHA’s Mazarro said the UN body is working closely with the government to enhance and streamline coordination with foreign donors and aid agencies. In the past, Myanmar’s government has resisted wider cooperation.

But according to Mazarro, that is changing. “They are very keen on engagement,” she said.

Zaw, the car dealer on Sule Pagoda Road, is happy that at least some action is being taken on safety measures.

“I was here when Cyclone Nargis blew over us, (and) it was terrible. If something similar happens now, we should be better prepared, because there are more buildings, more vehicles and more people here,” he said.