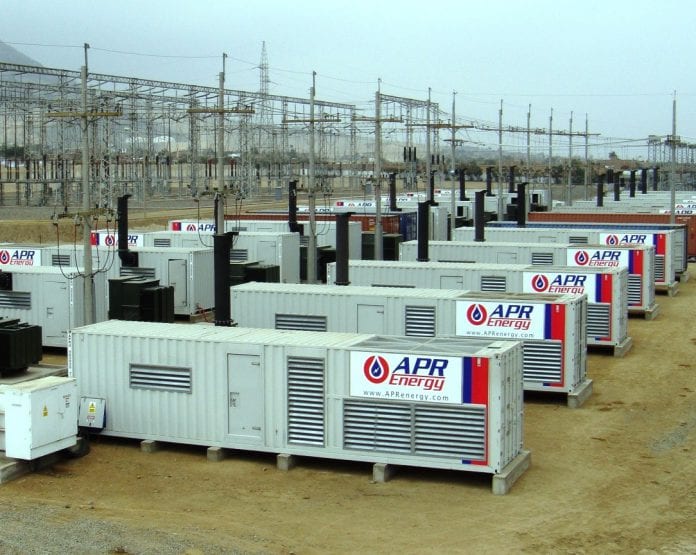 US-based APR Energy has landed a contract to build a “fast-track” 100-megawatt power plant in upper Myanmar, becoming the first American company to sign a power generation agreement with the government since the lifting of sanctions in 2013.

The facility will provide the Myanmar Electric Power Enterprise (MEPE) with a “guaranteed minimum of 82 megawatts (MW) of power generation, with plant capacity to deliver up to 100MW,” APR Energy said in a statement.

“The products we have are ideally suited to the needs of Myanmar’s power market. We plan to work with the ministry to provide solutions for further power needs within the country,” Clive Turton, APR Energy’s head of business development, Asia Pacific, told Myanmar Business Today in a phone interview.

Based in Kyaukse in Mandalay region, the plant will be run by natural gas, supplied through the Chinese-built Shwe gas pipeline, which runs from Myanmar’s Rakhine state to China’s Yunan province.

“The key deliverable of APR is … to deliver gas power generators in a very short time. Myanmar is unique in that sense that it has indigenous gas that can be used for power generation,” Turton said.

The company said the plant will be “one of the largest thermal plants in the country and will provide power to more than six million people,” in a country where about 70 percent of the population has no access to electricity, according to the World Bank.

The contract, which is on a rental basis, is due to start in the second quarter of 2014 and is expected to run through to late 2015, Turton said, declining to mention how much investment APR will make to install the power plant.

Turton said: “From APR’s point of view Myanmar is a key market. We are very keen to develop our businesses in the market and we will be looking forward to making a lot of investments in this country in this particular sector.

“There’s a growing demand for more power in the country and a low electrification rate. So, we are looking at more potential projects and we believe that our products are ideal to address the demand.”

APR said its turnkey plant, featuring mobile gas power modules (GPMs), will be “one of the cleanest power generation solutions in Myanmar and will represent a significant investment” in the infrastructure of the country.

“APR Energy will provide a bridging solution for the medium term while the country develops its long-term power generation infrastructure,” the company said in a release.

The power solutions provider said it won the contract due to its ability “to deliver to a very challenging timeframe, as well as for the efficiency of APR’s power generation technology.”

“We are delighted to have won this contract, based on our ability to optimise the use of natural gas resources in a fast, efficient, and effective manner,” said John Campion, APR Energy’s chief executive officer.

“This contract will create one of the biggest thermal plants in the country … Together with our recent installation of 130MW of new power generation in Indonesia, the Myanmar project is a great example of the real traction we are seeing in the Asia Pacific region since opening our Malaysia hub and Singapore commercial office.”

Derek Mitchell, American ambassador to Myanmar, said in a statement that doing business in an emerging market economy “does not come without its challenges, including the need to implement key economic reform policies, address infrastructure challenges, and make sure all benefit from the country’s economic potential.”

“We are confident that American businesses, with their experience and commitment to principled and transparent approaches, will make a tangible contribution to these efforts.”