As Dual Elections Near, Myanmar Makes Push Against US Sanctions 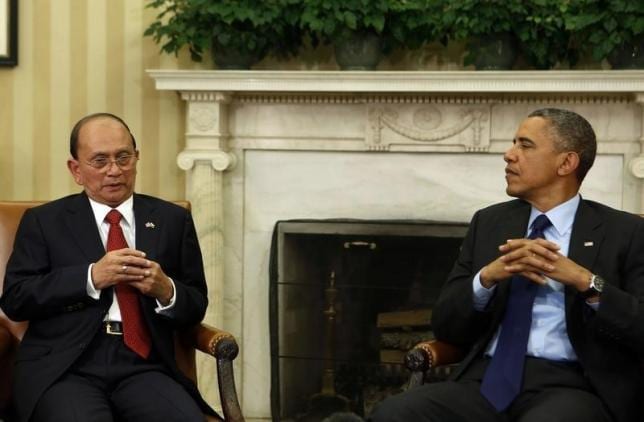 Late last month, it became public that the Myanmar government through its embassy in Washington, had signed an $840,000 contract with The Podesta Group, a lobbying firm with strong ties with the US Democratic Party.

The year-long contract coincides with the last year of Obama’s administration, as well as Hillary Clinton’s campaign for president. Both politicians have shown sympathies with the Myanmar establishment, having presided over 2012’s easing of sanctions on the country, and each having visited the country two times.

Podesta Group was founded by brothers John and Tony Podesta. The former left the firm, and is currently chairman of Hillary Clinton’s presidential campaign, having formerly been Bill Clinton’s chief of staff and counsellor to Obama.

The US government has shown some willingness to move towards a lift of sanctions. In late April, Obama signed an order to remove one person from the Specially Designated Nationals List – the business mogul Win Aung.

As has been widely assumed, a presidential advisor told The Irrawaddy magazine that intended purpose of employing Podesta Group was to lobby for a complete lifting of US sanctions on Myanmar.

Wider sanctions including an import ban on goods from Myanmar (with the exception of jade and rubies) was lifted in late 2012, there is still an extensive list of individuals and their associated companies still subject to sanctions, known as the Specially Designated Nationals List.

This list, publicly available from the US Treasury Office of Foreign Asset Control, includes prominent figures such as: Tay Za, the country’s one of the richest individuals with holdings in timber, airlines and tourism; and Khin Shwe, a member of parliament and construction and hotel magnate, along with many other individuals and their associated companies.

Several important banks remain on the list, but have been given special exemptions for many kinds of transactions. One such institution is Myanma Economic Bank, set to be one of the operators of the Yangon Stock Exchange, planned to open in October.

According to the treasury department, the US sanctions still in place prohibit investment in, “the Burma Ministry of Defense, in clouding the office of procurement, any state or non-state armed group (which includes the military); or any entity in which any of the foregoing own a 50 percent or greater interest.” This section can be particularly troublesome, given the wide range of investments owned by various armed groups around Myanmar.

As such, these sanctions don’t directly target the country as a whole, but managing to do business in Myanmar without interactions with some of its most influential and politically powerful business leaders can deeply complicate business in the country.

Many other countries do not impose such sanction on these leaders, locally known as “cronies”, and as other countries come to invest capital in Myanmar, US sanctions have lost a great deal of their relevance.

The EU last year granted a preferential trading status to Myanmar, allowing the trade of everything but arms, significantly more permissive than US policies. As a result, EU investment in the country has grown to almost 10 times that directly originating from the US. However, a great deal of American investment is obscured by Singapore-based shell companies, in order to take advantage of tax treaties between Myanmar and Singapore and avoid American tax penalties.

The US may ultimately be forced from within to revise its sanctions in order to keep up with investments by other companies. Win Aung’s position in the Union of Myanmar Federation of Chambers of Commerce and Industry (UMFCCI) and involvement in the Thilawa Special Economic Zone has been suggested as major reasons for the removal from the US sanctions list.

Podesta Group’s lobbying efforts are unlikely to ever be made public, and the push to remove sanctions in time for the Myanmar and US elections will depend on lobbying efforts of Podesta but not as heavily as the economic and political interests of the US in Myanmar.