As Singapore Gets Richer, More People Left Behind 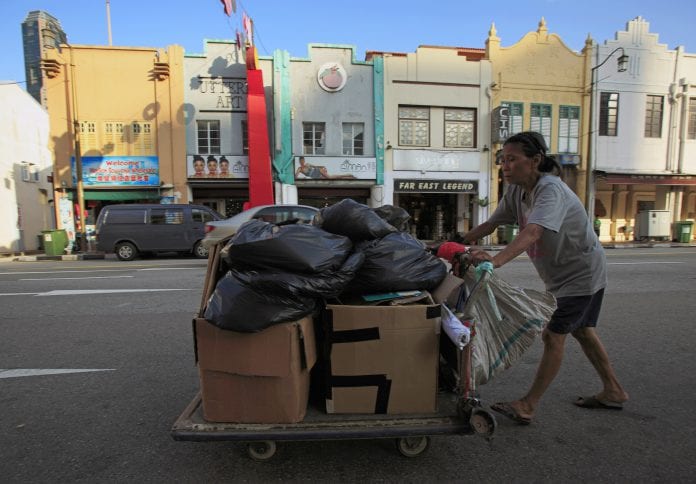 Every day, through eyes clouded by glaucoma, Peter witnesses the spending power generated by Singapore’s economic success, knowing he can only afford to look.

The 54-year-old shopping mall security guard is part of Singapore’s hidden problem – a growing number of poor living on the margins in one of the world’s most expensive cities.

The party that has run the city state since independence in 1965 has always preached the virtues of self-reliance, but for some the cost of looking after themselves has moved beyond their means.

Peter fears that he cannot afford to treat his glaucoma, a condition that could threaten his sight, despite being eligible for subsidised surgery and other state benefits.

He was told treatment would cost over S$4,000 ($3,200), but the ailment only qualifies him to take up to S$1,700 from his state-administered healthcare savings.

Peter, who wanted his surname to be withheld as he did not have his employer’s permission to speak to media, earns around S$1,600 ($1,300) a month working in the glitzy Orchard Road area.

Half of his salary goes paying off S$20,000 of debts run up when his wife broke her ankle two years ago, and they are also still paying off their small flat in a public housing block.

“We have no savings,” he mumbled, recounting how he had borrowed from 18 moneylenders after his wife’s accident.

Yet, Mindshare, a global media and marketing services firm, found in a survey last year that 72 percent of Singaporeans felt they “cannot afford to get sick due to high medical costs”.

Data for 2002 to 2011 shows the government paid for less than one third of all healthcare costs, whereas the average for developed countries in the Organisation of Economic Cooperation and Development was between 60-70 percent.

Mounting unease over the number of voters who feel excluded from the comforts of living in Singapore has persuaded the People’s Action Party (PAP) to re-set its goals.

At a convention in December, the ruling party issued its first new resolution in 25 years, promising to improve living standards for all, create quality jobs, and provide affordable healthcare.

Minister for Social and Family Development Chan Chun Sing said the government is ready to help citizens struggling to meet medical costs, but some were unaware of the support available.

“Very often, the people who are most in need may not read the newspapers, access the internet or even understand English,” he told parliament. “They need people who can talk to them in their language, people who will knock on their doors, check on them to see whether they are okay, and explain some of these assistance schemes to them.”

The city-state has seen a huge rise in wealth over the past decade as it positioned itself as a luxury low-tax base for ultra-wealthy people from across the world.

Per-capita GDP of S$65,048 exceeds that of the United States and Germany. And surveys highlight how Singapore, with a population of 5.4 million people, has more millionaires per capita than any other country. The Economist Intelligence Unit ranks it as the world’s sixth most expensive city.

“As one of the world’s richest nations, we can afford to do better,” Caritas Singapore, the Catholic Church’s social outreach arm, said at the launch of an advertising and social media campaign to highlight the plight of the poor.

About 12 percent of the 2 million Singaporeans at work earn less than S$1,000 a month. Whereas, Hui Weng Tat, an associate professor in economics at the Lee Kuan Yew School of Public Policy, reckons a typical worker needs a minimum S$1,400-S$1,500 a month to cope with living costs.

The city-state’s Gini co-efficient, a measure of income inequality, hit 0.478 in 2012, according to government figures, higher than every other advanced economy aside from Hong Kong.

Unlike Hong Kong, Singapore has not set an official poverty line, and the government has rejected calls to introduce a minimum wage.

What PAP has done is to make it harder for firms to recruit low-cost foreigners, tighten requirements to boost wages at the low-end, and amend labour laws to give more job security.

There are also plans to expand social protection and increase spending on healthcare. And while Singapore isn’t going to raise income tax anytime soon, it has raised taxes on bigger cars and luxury homes.

“There’s more to be done,” Finance Minister Tharman Shanmugaratnam said during a recent dialogue with diplomats and university students. “I’m not satisfied with the situation in the way it is.”                      Reuters