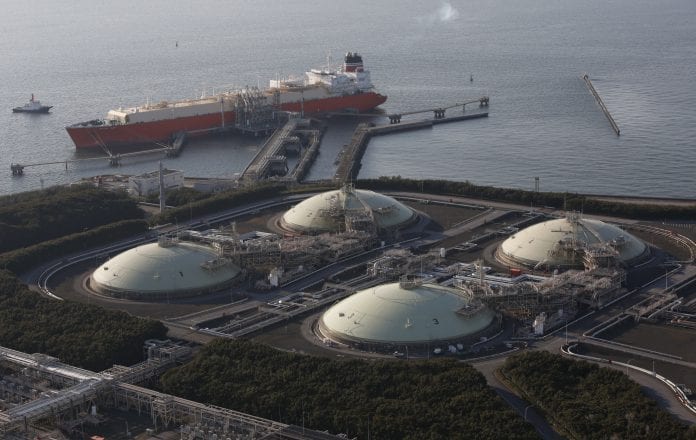 The stage is set for higher spot Asian liquefied natural gas prices as a cooler winter looms, China faces a gas shortfall, India buys more and nuclear power remains idled in Japan and South Korea.
While LNG prices – currently at $17 per million British thermal units (mmBtu) – are still sitting 14 percent below the last winter peak of $19.67 hit on February 18, they have already recovered 20 percent from this year’s low of $14.13.
And chances are prices may rise more than they did last northern winter as there appear to be more demand drivers than were apparent at the same time last year.
Chief among them is the shutdown of all 50 nuclear reactors in Japan and public scepticism over atomic power amid ongoing problems managing radioactive leaks at the Fukushima plant, which was destroyed in the devastating March 2011 earthquake.
While 13 reactors are currently awaiting approvals to restart, progress has been slow and none are likely to come online before year end. Three may however start generating again by the first quarter of 2014.
Japan’s LNG imports dropped by 1.63 million tonnes, or 2.5 percent, in the first nine months of the year compared to the same period in 2012, according to consultants Energy Aspects.
The drop was mainly due to a 3.1 percent decline in electricity output and a rising share for coal-fired and hydro generation, Energy Aspects said.
However, LNG imports may increase in the final quarter as utilities prepare for a winter that may be colder than normal. Also, last winter two nuclear units were operating and this is unlikely to be the case this season.
There is a 40 percent chance of lower-than-average temperatures from November to February in three major regions, the Japan Meteorological Agency has said.
South Korea is also having issues with its nuclear fleet, with 100 people indicted in a corruption scandal over fake safety certifications.
Currently six of its 23 reactors are offline and a decision on whether they can restart isn’t expected until late this year.
The country barely avoided a repeat of the blackouts from the summer of 2011 between June and August this year as it cut power use in a nationwide energy saving campaign.
This means that even a slightly colder winter is likely to strain the electricity grid and may lead to higher LNG imports by the world’s second-biggest buyer of the chilled fuel.
South Korea bought 29.476 million tonnes of LNG in the first nine months of the year, up 12.2 percent from a year ago.
China, Asia’s emerging LNG buyer, may also have to turn to buying more spot cargoes as the country’s top economic planner has warned of natural gas shortages this winter.
The National Development and Reform Commission (NDRC) said on October 21 it would try to control the number of new gas users to alleviate shortages, amid concerns that the country has been too successful in encouraging a switch to the cleaner fuel in order to reduce pollution from burning coal.
China’s LNG imports in the first nine months of 2013 jumped by a quarter from a year earlier to 12.87 million tonnes.
The NDRC has also called for state oil companies such as China National Petroleum Corp to speed up building LNG re-gasification terminals and act to prevent shortages, effectively giving the green light to more LNG imports.
India is also poised to buy more cargoes, with state-run utility GAIL India Ltd saying on October 25 it plans to buy 19 cargoes by March, of which nine will be sourced from the spot market.
Clyde Russell is a Reuters market analyst. The views expressed are his own.