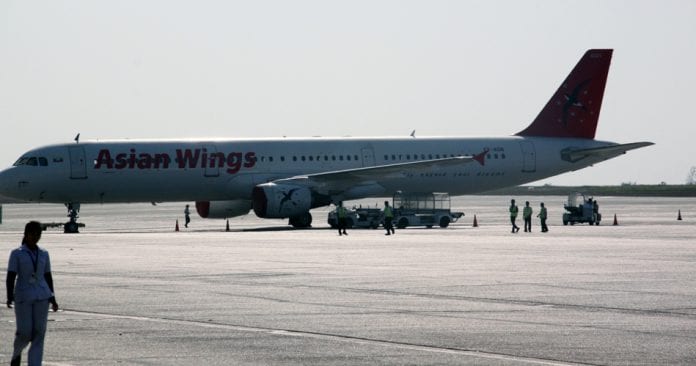 The carrier will operate two flights every week on Wednesday and Saturday between the two cities, AWA said.

“Passengers from Chiang Mai can fly not only to Mandalay, but also to Heho with immediate connection from Mandalay with the same fare,” AWA said.

As a private airline based in Yangon International Airport, Asian Wings Airways was inaugurated in September 2010. It started its domestic flight operations, both schedule and chartered flights, in January 2011, and is currently flying to 12 domestic destinations including Nyaung Oo, Yangon, Mandalay, Nay Pyi Taw, Heho, Mawlamyine, Myitkyina, among others.

AWA has a fleet of three ATR 72-500 aircrafts with capacities ranging from 64 to 70 seats per aircraft. It used to fly an Airbus A321 in its domestic scheduled operations and international chartered ones, but was returned as “the A321 was not viable in terms of profitability as many domestic airports has constraints in accommodating the big aircraft,” U Ye Myat Min, commercial manager of Asian Wings Airways, told Myanmar Business Today.

“We have been flying as a full service carrier since our debut and have emphasised on maintaining international safety standards, which we think are the most important value an airline to adhere to rather than cost. We offer very reasonable fares for every route for a full service carrier,” he said.

U Ye Myat Min said the airline is also planning to expand its international route to “several regional destinations as Bangkok, Singapore, Kuala Lumpur and Bali, in the future upon the reinforcement of its fleet with the Airbus A320s.”

In September last year, Japan’s largest aviation group ANA Holdings Inc said it will buy a stake in AWA as part of an international expansion strategy, which will make it the first foreign investor in Myanmar’s nascent aviation industry.

The Japanese carrier will pay $25 million for a 49 percent stake in the Myanmar carrier, the Tokyo-based airline said in a statement. As part of the investment, ANA will work with AWA to improve its operational and on-time performance and sup­port its expansion into markets outside Myanmar, ANA said.

Currently, Asian Wings Airways is “in the process of negotiating” regarding the joint venture agreement with ANA, Ye Myat Min said.