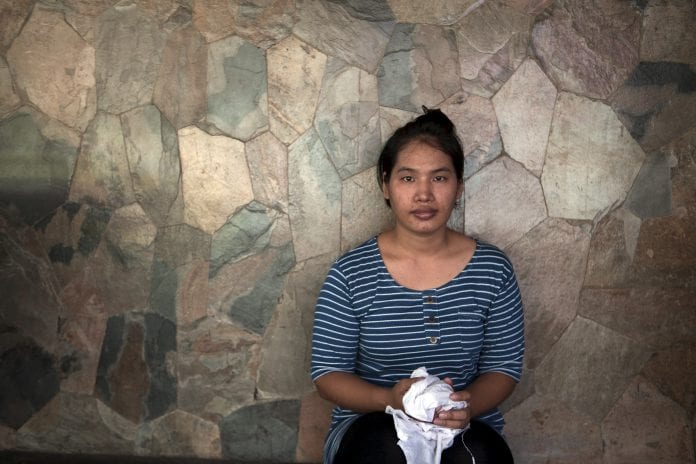 Suay Ing was nine when she was first employed as a domestic worker, cleaning for a family and sleeping in their laundry room in the northern Thai city of Chiang Mai for $10 a month.

The eldest of four children of migrant construction workers from Myanmar, Ing was 14 when she was trafficked to Bangkok by a broker who promised her a job and abandoned her.

Hungry and with no identification papers or money, the unkempt child finally found a noodle shop owner willing to hire her for 3,000 baht ($100) a month in exchange for working 12-hour shifts with three days off a month.

Over the next 14 years, he taught her to manage the shop, but also beat her, docked her pay and even denied her food.

Two years ago, she plucked up the courage to leave her abusive boss, turning again to domestic work, but this time, armed with greater knowledge of her rights, she got decent pay, days off and reasonable hours.

"I tell domestic workers to ask about their days off, about whether or not they will have their salaries cut if they go home," Ing said in a voice that speaks to her determination to keep others from suffering hardship.

"If the domestic workers ask these questions, then the employers know they can't take advantage of them."

Asia is home to 41 percent of the estimated 53 million domestic workers worldwide, most of them women who enjoy few rights, work excessively long days and earn far below the minimum wage, rights groups say.

Under Thai law, domestic workers are entitled to at least one day off per week. Labourers have a right to an eight-hour workday and a minimum wage of 300 baht a day, but these do not apply to domestic work, which is not considered formal work.

"Thai society does not see domestic work as work, so the person doing housework is not a worker," said Poonsap Tulaphan, director of the Foundation for Labour and Employment Promotion, a Thai organisation that helped set up the Network of Migrant Domestic Workers and its Thai predecessor, HomeNet.

Many migrant domestic workers come from the Philippines, Indonesia, Laos, Cambodia and Myanmar, and work in neighbouring countries as well as the Middle East.

Occasionally, cases of violence make the headlines, such as the 7-year-old girl from Myanmar who was enslaved for five years in Thailand, or the Indonesian maid, Erwiana Sulistyaningsih, whose employer in Hong Kong was found guilty in February of charges including grievous bodily harm.

She said Asians have traditionally hired domestic workers from indigenous or ethnic minority groups, lower castes or poor families, and believe they are doing them a favour by doing so.

"Employers tend to think, 'You're so poor. If I don't give you work in my house, you will probably die, you will have nothing to eat.' These kinds of attitudes are deep rooted," Tang told the Thomson Reuters Foundation.

Many migrant domestic workers land in their new countries of employment unable to speak English or the local language, and with no friends, family or money.

Organised networks – such as the ones the Filipinas, Indonesians and Thais have set up in Hong Kong – have helped to give women support and information to protect themselves.

In Thailand, for example, the Network of Migrant Domestic Workers says about 15 of its 75 Burmese members have at least one day off each week. About 80 percent of them work with Westerners, who tend to pay more.

"We are domestic workers, too, we aren't doctors, we aren't lawyers. If they need help, we have to learn, too, what rights we have, how we can access those rights and be ready to help others," said Champa, who belongs to the Network of Migrant Domestic Workers. (Thomson Reuters Foundation)