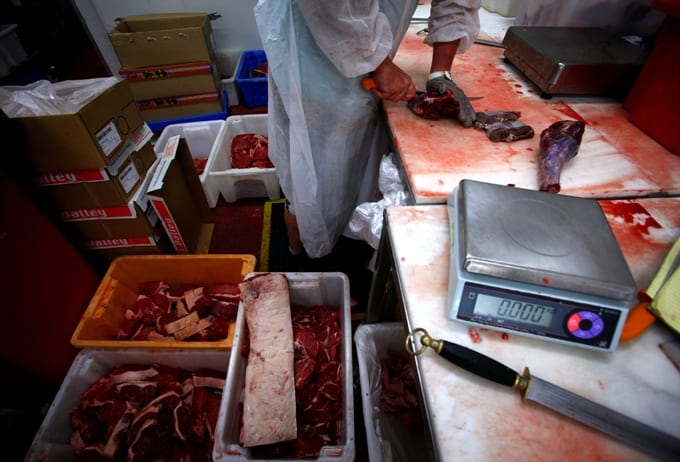 Once considered pet food, kangaroo meat could soon be sold to China as a luxury product, to encourage Chinese consumers to do something few Australians will – eat it.
With a booming middle class, China’s appetite for meat is expected to rise nearly 17 percent over the next eight years, the World Trade Organisation says.
Exporters do not yet have permission to sell kangaroo meat to China but recent comments by Australian officials have put the industry in a bullish mood.
“This is something that ticks a whole range of boxes,” Agriculture Minister Barnaby Joyce told the Australian Broadcasting Corp.
“I’m going to try and look at further discussions with the Chinese because I think there is a big prospect for a market there.”
Wang Jun, the owner of a small restaurant in Beijing, said he would be keen to try kangaroo.
“Why not? As long as it is delicious,” Wang said.
Beef, pork and chicken are staples in China but some diners also tuck into cat, rat, dog and more exotic animals in the belief that they have medicinal qualities. Still, not everyone may be so adventurous when it comes to kangaroo.
“How could we lay our chopsticks on such cute animals?” said Liu Xinxin, a 21-year-old university student from Beijing.
Liu’s comments echo sentiments in Australia that have kept the kangaroo meat industry in a state of suspended development.
A 2008 government survey showed nearly a fifth of Australians would never eat kangaroo on ethical grounds.
Others are reluctant to consume an animal that figures in the national coat of arms. Just 15.5 percent of people eat kangaroo meat more than four times a year.
Australia is already a large supplier of red meat to China, with shipments worth A$616 million ($577 million) in the 2012/13 season. The kangaroo industry hopes to jump into the action.
“It would be huge if we could get access to the Chinese market and they are certainty very interested,” said Ray Borda, founder and managing director of Macro Meats, Australia’s largest processor of kangaroo and wild game meat.
Kangaroos, protected by state and federal law, are caught in the wild, not farmed. Licensed hunters make a cull of a fixed number and specific types every year.
Some of the impetus for exports follows a boom in the population of the animals after good rains last year. Drought this season in the largest cattle-producing state of Queensland has prompted farmers to demand a bigger cull as kangaroos compete with cows for grazing space.
Australian supermarkets sell kangaroo fillets for about A$20 per kg ($8.54 per pound), or about 30 percent to 50 percent less than beef. The kangaroo industry aims for a different story in China, by promoting it as an exclusive item, touting its health benefits as a high-protein, low-fat food.
Australia’s Department of Agriculture did not reply to queries from Reuters about the status of export talks with China but the interest on both sides is clear.
John McVeigh, Queensland’s agriculture minister, has just returned from China, where he talked to importers keen to start trade in kangaroo meat.
Borda and his company are readying for an opening.
Macro Meats has partnered with New Hope Group Ltd, one of China’s largest agribusiness operators, and the two firms have developed a strategy to woo customers and project exclusivity by limiting supply.
“Our strategy will see us place kangaroo only in high-end butchers, not in supermarkets,” Borda said. “If the market was to open tomorrow, we would enter without much fanfare.”                       Reuters