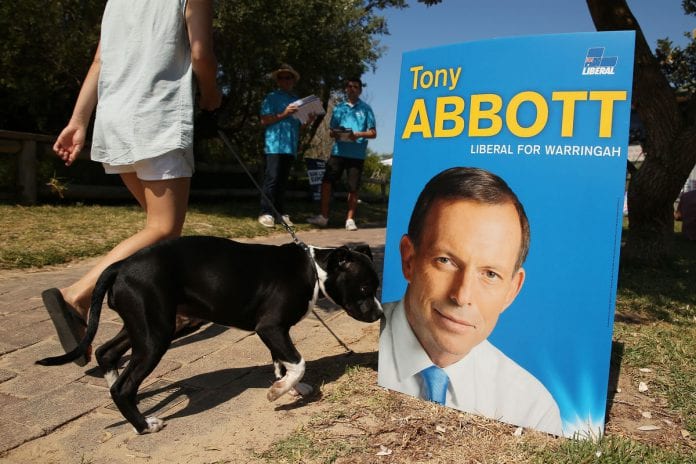 Support for Australian Prime Minister Tony Abbott’s conservative government has collapsed following the release of an austerity budget that has emboldened opponents and even sparked calls for early elections.

The government released a contentious budget packed with deregulation moves, new levies and spending cuts aimed at overcoming what it calls unsustainable deficits totalling A$60 billion ($56 billion) over the next four years.

Thousands of protesters took to the streets of Australia’s biggest cities at the weekend to rail against the changes to welfare, healthcare, education and pensions that they say outstrip the mandate Abbott won in elections last year.

“Within a very short period of time he has effectively turned around to the people who voted for him and said ‘Stuff you’,” Greens Party deputy leader Adam Bandt told Reuters.

“The polls suggest that is not going down at all well with voters. There is only so long an already unpopular prime minister can suffer further blows, not just to his popularity, but to his government’s support.”

Two polls in the wake of the budget, one by Nielsen and the other by Newspoll, showed a precipitous drop in the popularity of Abbott and the Liberal-National coalition he leads.

Both showed that Labor would handily win fresh elections, a sharp reversal for a party that was only recently turfed from office after six tumultuous years in power.

Perhaps most worrying for the government, however, is the perception that it has stumbled badly in framing a budget the polls say is seen as both disproportionately punishing the poor and bad for the economy.

“I think people don’t like the medicine, and the government has stoked up the bad reaction for themselves almost amateurishly and now are copping it,” John Wanna, a professor of politics at the Australian National University, told Reuters.

The Greens have now publicly called for early elections, and Bandt says he is hopeful that both Labor and mining magnate Clive Palmer, whose Palmer United Party will have the balance of power in the incoming Senate, will help to bring that about.

Abbott had raised recently the prospect of an election if his budget was blocked, but he seemed to rule that out in the wake of the polls.

“My job is not necessarily to win a popularity contest. My job is to run the country effectively, and that’s what I’m going to do my best to do,” Abbott told the Australian Broadcasting Corporation.

The budget is likely to further dent consumer confidence, which could be reflected in consumer sentiment data, said Stephen Walters, an analyst with JP Morgan.