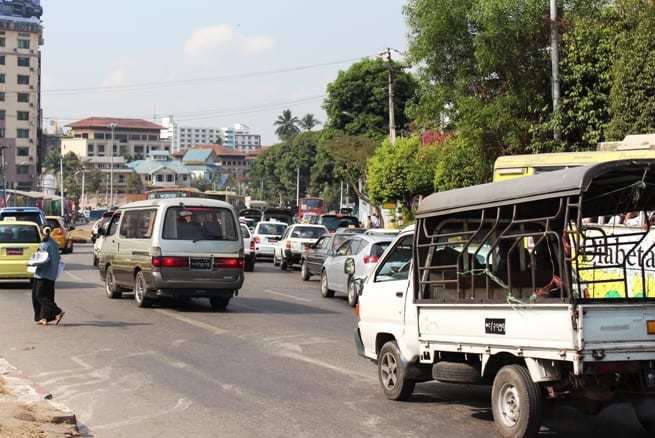 The Central Supervisory Committee for Motor Vehicles and Vessels (CSCMVV) of Yangon region will join hands with local companies to sell minibuses by installments starting from March 31, a top department official said.

The move comes as the department aims to replace the Hilux cars that currently ply the streets of Yangon with newer, bigger minibuses.

The Ministry of Transport initially launched an old car substitution program in 2011 in a bid to get rid of the ramshackle cars that were ubiquitous in Yangon’s street since the ’90s. The “replace old with new” program brought in a flood of imported cleaner, brand new Japanese cars, but ironically contributed to the recent punishing traffic jams in the commercial hub of the country.

The department aims to replace all the Hilux cars, which are currently used as public transport, and also increase the number of minibuses on the same routes, Chairman U Hla Aung said.

The minibuses, of Hyundai Global 900 brand, will be imported from South Korea. Local firms Htoo Family, Lucky Family, General Armanthit and six other companies will import the minibuses, U Hla Aung said.

The authorities have also introduced car sales on loans through state-run banks to facilitate the purchase of the new buses. The current plan allows paying 30 percent down payment and the rest over two to three years.

The Yangon region government said it wants the buses to run on compressed natural gas (CNG), a cheaper and cleaner fuel that Myanmar has in plenty.

According to CSCMVV, there are 804 Hilux cars running in 46 routes in Yangon region.