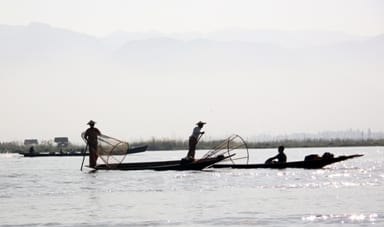 Inle Lake will see a K750 million ($767,000) renovation to its embankment and shores this year thanks to a grant from the Shan State government.

The regional government received K1.5 billion ($1.5 million) from fees collected over the past year from the visitors to the lake.

U Win Myint, Inntha Ethnic Minister of Shan State, said, “The money will be granted to a tender winner [who will carry out the project]. The State Finance Ministry will disburse the fund in four-month installments.”

In the past the military collected the foreign entry fee charged to visit the lake but locals were unaware of how much money was being used for the state. However, new Hluttaw representatives elected in 2011 have established controls over the proceeds.

To increase revenue from the lake the price per foreign entry visit, for the almost 150,000 people who visit the lake each year, was doubled from $5 (K5,000) to $10 in last October.

The lake has suffered from recent deforestation with silt deposits and uncontrolled garbage inflow forming deposits in the lake.