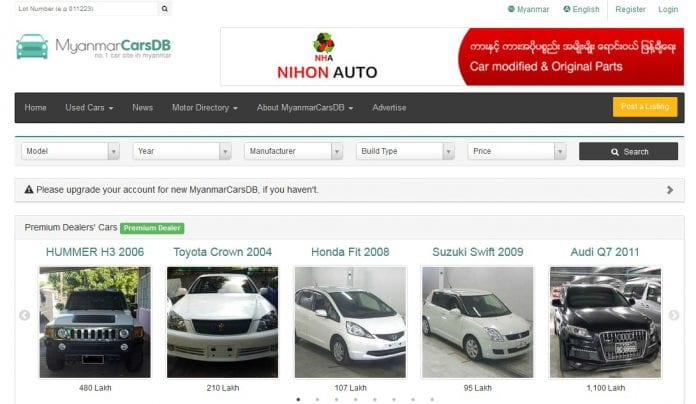 Yangon-based tech startups are drawing record levels of venture capital investments with fresh seeding rounds by angel investors from around the world. Capitalising on the digital revolution of startups in Yangon’s booming technology sector, new figures show the year 2014 has been a splendid year for Myanmar startups.

MyanmarCarsDB, operated by a local marketplace builder, Rebbiz, is one of the few early ventures in Myanmar tech startup scene. It was launched as an online automobile marketplace in early 2012 through the first seeding round in $160,000 by Singapore Angel investors.

Connecting car buyers and sellers in Myanmar, MyanmarCarsDB is a go-to source for enthusiasts searching for car classified, local car market news, local auto tax information and auto directory services throughout Myanmar. Since its launch, the portal now has more than 40,000 cars listed, and gets about 6 million hits a month.

Di Gregorio said, “Myanmar is the last untouched market in Asia. Frontier’s investment in the leading automobile site ideally positions us as Myanmar’s market emerges. We are actively working with the management teams of MyanmarCarsDB to accelerate its growth and extend the market leadership.

According to angel.co and other investment data, Myanmar startups have convinced venture capital firms and angel investors to put in at least $1 million for seed funding rounds over 2012 to 2014.

CEO and Co-founder of Rebbiz, Wai Yan Lin, said, “Car market in Myanmar is huge. There are about 600,000 registered cars, double the number in 2011. We aim to make improvements in our product and service leveraging the investment.”

“Tech industry in Myanmar is booming and with exceptional local talents it is inviting record breaking levels of investment from across the globe. We are now ready to compete with international players,” Wai Yan Lin said.

The deal completed in 2014 would help MyanmarCarsDB to further attract investments from international investors, he said.