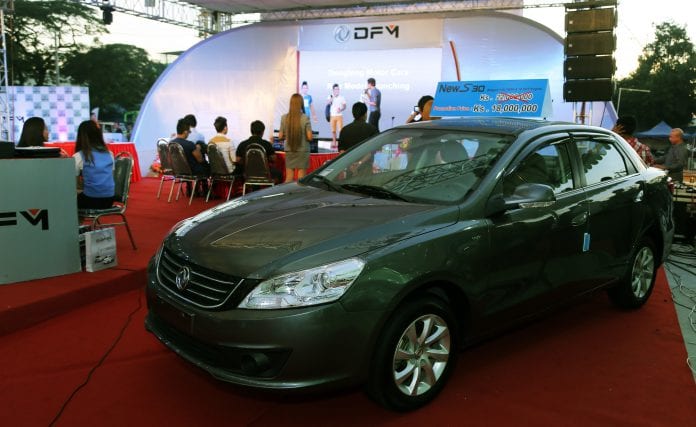 The DFM mini automobiles are already being exported in over 70 countries. It is considered comparatively more reliable, albeit still cheaper, than other Chinese-made vehicles.

“Myanmar’s economy is now developing at a fast pace, creating unprecedented opportunities for Myanmar people in terms of lifestyle. From our experience in China, we understand the citizens’ dream of owning automobiles. That’s why we are entering this market,” Yang Bo, general manager of DFM, said.

Bo said the newly-introduced cars are manufactured as a “Chinese style mini auto based on European technology.” He claimed the vehicles to be the “safest mini autos” while being affordable.

He said the firm decided to partner with Sojitz and Yaung Ni Oo for Myanmar as they are already familiar with the local market. “This partnership can contribute to faster development of Myanmar’s auto market,” Bo said.

He said DFSK will collaborate with local sales representatives to boost auto sales in the country.

DFSK can be traced back to DFM, originally founded in 1969.  Dongfeng is now China’s third largest vehicle manufacturer, selling almost 2 million vehicles representing a 10.8 percent share of the Chinese marketplace.

DFSK was formed as a joint venture between DFM and Sokon Motor Group and today operate six manufacturing sites within China, producing mini vans, motorcycles, ATVs and shock absorbers. DFSK is currently engaged in partnerships with several of the world’s leading motor manufacturers, making its vehicles for the Chinese domestic vehicle market.