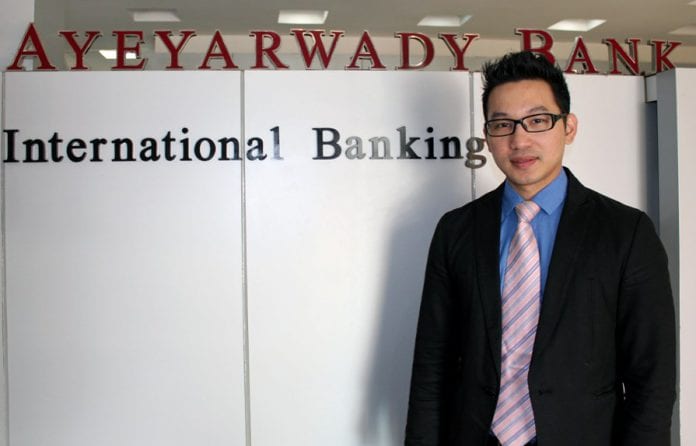 When Colin came back to Myanmar from Singapore five months ago he found it “a very challenging environment” to work in. “When I was overseas, everything was in place. But when you work here, in terms of human capacity and productivity, it’s not the same at all. It’s also hard to communicate messages through sometimes,” said Colin (whose Myanmar name is Thura Maung), assistant general manager of Ayeyarwady Bank’s Strategic Planning Department, the brain behind the bank’s products and services, future plans and expansion strategies.

But now he is facing up to the challenges. “Sometimes it’s not about how much you know, but about how well you know how people work. There are challenges – not only domestic but also foreign banks are facing them.”

Ayeyarwady Bank, owned by tycoon U Zaw Zaw, started its operations in August 2010 after it received the Central Bank of Myanmar’s approval. Since then it has established 54 branches and expanded its customer base to about 150,000. The bank’s assets jumped from $95 million in 2011 to $536 million in June 2013, and revenues increased by a staggering 5,630 percent to $17.6 million over the same period.

The US Treasury in February last year lifted its sanctions on Ayeyarwady Bank, along with three other Myanmar banks, allowing them to engage in financial transactions with US institutions. All four banks remain on the SDN list, which allows the US government to respond quickly should the Myanmar government backslide on reforms.

Ayeyarwady Bank, or Aya Bank, has a lot of upcoming developments in 2014, Colin said. “Our focus is to expand as much as possible and launch some new products and services to enhance customer experience. IT and technology based improvement will be our main focus.”

He said Ayeyarwady is looking to expand its branch numbers to 100 by this year “to make the bank’s services more accessible.”

However, he said the bank is daunted by the infrastructural challenges and human resources shortage. “It’s hard to find competent people for the new branches. There’s problem with electricity, transportation, telecommunications and internet.

“Sometimes you can risk having bad customer experiences in some places if you can’t take care of the infrastructural bottlenecks. As a bank we cannot afford this.”

Currently, Aya Bank has over 70 ATMs and the bank also has plans for a massive ATM network expansion, Colin said, without providing further details.

The big unveiling, however, from Ayeyarwady’s part is going to be the introduction of a complete internet banking solution in Myanmar for the first time. “Our launch of internet banking will be a breakthrough in Myanmar’s banking sector. Now some banks offer bill pay and other small services via online but we are going to provide fully-fledged internet banking which is not available [in Myanmar] right now.”

Aya Bank aims to accomplish that through a unique feature that already exists in the bank – Core Banking System.

Aya was the first and yet the only bank in Myanmar to implement a fully centralised CORE Banking System for all its branches. In CORE Banking System, or centralised online real-time electronic banking, all the branches of a bank access applications from centralised datacenters. This means that the deposits made are reflected immediately on the bank’s servers and the customer can withdraw the deposited money from any of the bank’s branches. Other banks in Myanmar use a distributed core banking system, where there are several databases around the country.

Colin said core banking has a lot of setback and a lot of advantages. “You can take out money anywhere, you can transfer money from one city to another, and you can also transfer money to other banks. But, the drawback is the infrastructural problems we face. The infrastructure is not strong enough to support the network – there are line drops, slow and disrupted connection and so on,” he said, adding that the bank had to spend a lot of money to tackle those problems using advanced equipment.

However, he thinks taking care of the problem should not be on the banks’ side. “Every bank is facing this issue. I think that’s why many haven’t been able to properly implement core banking. It very much depends on how the government builds up the infrastructure,” Colin said, adding that the entry of two telecom players – Telenor and Ooredoo – will help improve the communication infrastructure problems.

Colin said Aya’s IT department is still working on the internet banking system to improve its security features, and taking its time so that the solution meets international standard. “We are still in the testing phase and no fixed time for the launch has been set. But we are definitely going to launch it by the end of this year – it might not even take that long.”

Ayeyarwady has agreements with most payment networks that operate in Myanmar. It struck deals with Visa in December last year, MasterCard and China Union Pay in November, and with Western Union in July 2013.

The bank also has remittance service set up with Singapore’s DBS Bank. There are plans to expand Aya’s remittance services to Thailand but nothing have been set out yet. Aya has formed strategic alliance with some Japanese banks regarding remittance, Colin said.

Ayeyarwady is also planning to launch tap and go Visa Prepaid cards in Myanmar, he said. Tap and go system uses contactless ATMs that allow customers to withdraw money [up to a certain limit] without putting a card into a cash machine. The user swipes their card across a machine’s reader and transaction is done using a touch-screen and data entry pad. The new technology is believed to be a faster way to access cash and able to reduce the likelihood of customers leaving their cards at machines by mistake.

Colin said Myanmar’s traditional cash-based economy will take some time to move from one era to another. “Trust is a thing that you need to build over time. I understand that we had a financial crisis and a lot of people lost their faith in banks. But the era from the last time and now is very much different.”

He said the central bank has taken a lot of measures and is now standing behind the banks. “I’m sure the financial crisis will not happen again.”

Colin said there are a lot of pros and cons of the breakneck speed of reforms. “Opening up the country is good but that represents some risk as well. Myanmar was an unknown place that turned into the hottest destination in the world. Everybody is coming in, investments are pouring in – it’s all good. The risk is whether we would be able to sustain these reforms.”

Colin is apprehensive about the entry of foreign banks in Myanmar as he thinks local banks are not ready to compete in an open market with international banks having years of expertise, better technology and human resources.

“Either a foreign bank is wholly owned or forms joint venture with local bank, both arrangements have their pros and cons. Even if the wholly owned subsidiaries are allowed, we should have some control measures so that we don’t hurt our local banks. End of the day, this is our country, and we need local banking industry to develop,” he said.

Colin said despite the tremendous changes over the last two years there are still question marks ahead in terms of political risks, and that “2015 will be the tipping point.”

“If Central Bank of Myanmar’s financial reforms go according to the plan our banking standard should be at least up to Thai standard if not international standard. We can achieve that in five years,” Colin said.

“Opening up is a lot of challenge. We are playing catch up and trying to do it very fast with low capacity and human resources, and bad infrastructure – the challenge is quite big. People have been waiting for 50 years, so they can wait for two more.”