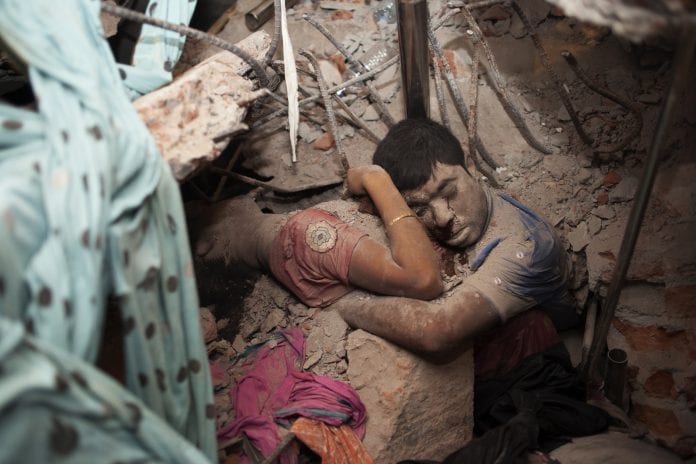 Bangladesh’s official wage board proposed a 77 percent rise in the minimum wage for garment workers last week after a string of fatal factory accidents this year thrust poor pay and conditions into the international spotlight.
Garment factory staff went on strike over wages for six days in September, hitting production at almost 20 percent of the country’s 3,200 factories.
The strikes followed similar protests over the summer.
The world’s second largest clothing exporter hopes to announce a new minimum wage this month. The wage board proposed a rise in monthly pay to 5,300 taka ($68) after factory bosses formally offered 3,600 taka and then, after several meetings, raised that to 4,200 taka.
“The board proposed this amount considering the present reality both from the point of owners and workers,” board chairman AK Roy told reporters.
The proposal will go to the Ministry of Labour and Employment for review.
The wage negotiations must somehow strike a balance between Western fashion giants, politically connected factory owners and protesting staff, with the government’s eye on elections due to be held by January.
The government did not respond to strikes over wages last year, but since then accidents including the collapse of the Rana Plaza factory complex near Dhaka, which killed more than 1,100 garment workers, have put the authorities on the back foot.
Bangladesh appointed the board in May after the Rana Plaza disaster.
“We will urge the owners to implement it without any opposition, otherwise there will be a deadlock in the sector,” said Sirajul Islam Rony, a workers’ representative on the board.
But Arshad Jamal Dipu, a representative of the Bangladesh Garment Manufacturers and Exporters Association (BGMEA), said 77 percent rise was high.
“We will appeal to the government to consider our ability, and it should not take any decision out of emotion or political benefit,” he told Reuters.
The present minimum monthly wage for garment workers is around half those in rival Asian exporters Vietnam and Cambodia and just over a quarter of the rate in top exporter China, according to International Labour Organisation data from August.        Reuters