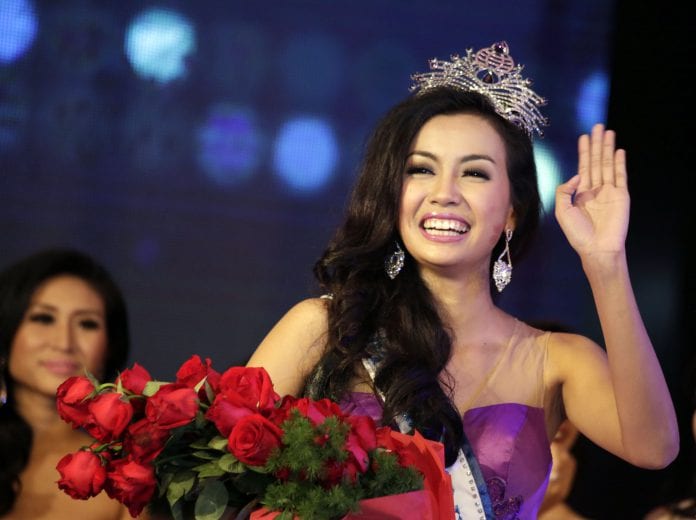 Sparkling in a red, sequined dress, Htet Htet Htun spun around the stage rehearsing a traditional Burmese dance that she hoped will make her stand out from 18 other young hopefuls who competed in the first Miss Myanmar World pageant.

Beauty pageants are thriving in Myanmar after being banned during nearly half a century of military dictatorship that ended in 2011 when a semi-civilian government took power.

Hoping for a better life and dreaming of fame and fortune, young Myanmar women are racing at every opportunity to enter the growing list of beauty contests that opened up to them in 2012.

But the rapid rise of an industry that splits opinion in many countries – with opponents accusing pageants of objectifying women – is exposing both the opportunities and pitfalls faced by modern Myanmar with stories of scandal and exploitation.

By the end of this year, Myanmar, formerly known as Burma, will have competed in at least 10 international pageants, including Miss Universe Myanmar and Miss Asia Pacific World. About 130 applicants signed up in four days for the inaugural Miss Myanmar World contest that was held on September 27.

“If I win, I want to do charity work that would befit a beauty queen. I’d also like to become an actress and continue working in the entertainment industry,” Htet Htet Htun, 22, told the Thomson Reuters Foundation outside a dimly-lit studio in the Myanmar’s biggest city, Yangon, after her rehearsal.

The popularity of beauty contests underscores how Myanmar is racing to catch up with the rest of the world after decades of near-isolation – and many contestants are finding themselves on a crash course in how to cope in such a competitive field.

May Myat Noe became the country’s first international beauty queen in May this year when she won the Miss Asia Pacific World title in Seoul, South Korea – only to be dethroned three months later in a vicious, public spat with contest organisers.

The South Korean organisers called her “rude and dishonest” and accused her of running off with the pageant crown when she left Seoul where she was to record songs with a K-pop girl band.

At a packed press conference in September, May Myat Noe accused the pageant’s organisers in Myanmar of falsifying her age from 16 to 18 and the Korean organisers of putting pressure on her to have plastic surgery to enlarge her breasts to boost her stardom.

“(The Korean organisers) also told me there is only one way to find money for my album and to continue in the entertainment business … to escort some business tycoons whenever they require my company,” she told the press conference.

The cut-throat nature of the pageant business may be new, but Chit Win, who is researching Myanmar’s political and societal transitions at the Australian National University, said beauty contests have existed in Myanmar for centuries.

But beauty pageants were banned from 1962 after General Ne Win staged a coup and launched a social crackdown.

Re-entering the world stage of beauty pageants has women across Myanmar seeking to emulate Western ideals.

Sharr Htut Eaindra, the reigning Miss Universe Myanmar, who spent a year polishing her skills for the contest, admitted the first thing she did to prepare was to lose weight.

The contests have also put the spotlight on continuing demographic divisions in Myanmar, a country of about 51 million people with over 100 ethnic groups still plagued by nationalism and ethnic conflicts.

Moe Set Wine, of mixed Burmese-Chinese heritage, became the first woman in 50 years to represent Myanmar at the Miss Universe contest in 2013 – and found herself the victim of a campaign on social media calling for her removal.

Burmese social media users questioned her ethnicity and used old photos of her at a Burmese Chinese pageant held in former capital Yangon.

Despite growing awareness that the beauty business can be cut-throat, the queue of women seeking a short cut to fame through the industry grows daily.

A title can bring massive publicity, public adoration and offers to star in movies and commercials. Pictures of current and former beauty queens adorn billboards, magazines and movie posters in Yangon.

“After I was crowned, my followers on Facebook jumped to tens of thousands,” said model and TV presenter Gonyi Aye Kyaw, a bubbly, articulate 25-year-old who competed in about half a dozen pageants before becoming Miss Myanmar International 2013.

Her account was hacked three days later – a confirmation of her new-found fame for her fans.

Tin Moe Lwin, a pioneer of Myanmar’s fast-growing modelling industry, credits the country’s changing attitudes and openness for the rising popularity of pageants.

Tin Moe Lwin, now in her 40s, is judging and training aspiring air hostesses for a pageant-style television talent contest that is currently in filming.

“Compared to when I started, there’s more interest in fashion, the girls are more confident and the society is more open,” she said while sipping tea at the lobby of the five-star Sedona Hotel in Yangon.

Still, there are risks in an industry that is as-of-yet unregulated with frequent stories of disputes and exploitation fuelled by chatter on social media.

Industry observers say the public spats often stem from contractual disputes between the pageants’ Myanmar organisers and the winners. Most contracts stipulate that beauty queens must make commission payment to the organisers, usually between 20 to 30 percent of all earnings for up to three years.

John Lwin, a former model and founder of Star & Models International, calls the disputes “a fight over the rice bowl.”

“Both sides need to understand that business transactions have to be mutually beneficial,” said Lwin, whose Yangon-based agency trained many of Myanmar’s current top models.

Despite the horror stories, many are undeterred, such as 19-year-old K Zin Po who is preparing for next year’s Miss Myanmar World, starting with learning how to walk and pose at Star & Models International.

“I backed out of competing this year because I wasn’t confident in myself,” said K Zin Po, who won Kaya Ahla Mae – a contest for model physique – in high school.

“The main thing is to get my body in shape and improve my talent (singing, dancing or acting).”

“It’s a consequence of Myanmar opening up,” she said. “It’s like dust coming in when you open the window. We can’t keep the window closed forever so we have to find a way to minimise the dust and maximise the sunlight.” Thomson Reuters Foundation