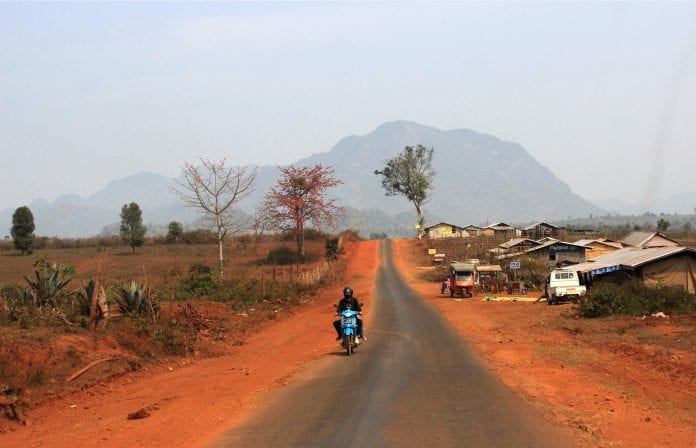 From the vantage point of Yangon the demographics of Myanmar can seem abstract, with only 30 percent of the country connected to the electrical grid and telephone connectivity in the teens. Especially in Shan state, with its turbulent history and complex knot of politics, development is a patchwork of different systems, both imposed and traditional.

Various groups in Shan state have been fighting against the government going back to the days of the British Raj. While some continue to take up arms, most were forced into ceasefires in the late 1980s and 1990s. Like in most other minority-dominated parts of Myanmar, these groups that accepted ceasefires were classified by the government as border guard forces (BGFs) and given a high degree of legal autonomy in exchange for their nominal allegiance to the government.

In this vacuum, services continue to operate, but differently from the rest of the country. In a changing Myanmar of industrial zones and increasing connectivity, these ceasefire zones continue to be bastions of old Burma, whose development will follow a unique path.

Links to the outside

With autonomy comes isolation, and contact with the outside is rare. Despite the geographic and legal reclusion, this author was given a rare opportunity to visit and conduct interviews in the territory of the Shan State Army 7th brigade, located a 12 hour drive northeast of Taunggyi, with a territory centered in Loilem District.

By standard of the BGFs, the SSA 7th is in a more tenuous situation than most. As recently as 2010, there has been sporadic fighting between the various ethnic resistance armies and the Tatmadaw. However, a few government services have entered the SSA territory, such as schools and health clinics, though sparsely distributed. For the most part, these ceasefire zones operate out of the reach of Naypyitaw.

The government has built a “union highway” leading to the SSA territory, and it connects to a road network inside the territory. In fact, besides sleepy checkpoints on either side, the transition is eerily smooth.

The land controlled by the SSA 7th is purported to be rich in zinc, jade and rubies, and earnings from these are a major source of income, as well as tax collected from illicit goods trafficked through the region, according to SSA 7th General Kai Hpa. Since the ceasefire, this particular group has had to spend significantly less on armaments, and a great deal of this money has gone into infrastructure. Kai Hpa claimed that they initiated projects in their territory such as hydropower, bridges, and roads, and that the government later came to provide support and connectivity.

In the smaller villages in the region such as the 70-household farming community of Wan Sark, commercial access to the outside world has barely begun to emerge. While these villages were previously self-sufficient, there is now a monthly marketplace where farmers can sell and barter for crops. The larger towns in the area have gone from groups of a dozen houses into marketplaces, stocked with goods brought in from Thailand, China, and other industrialised areas of Myanmar, according to one village resident.

Three years ago, a paved road was built through the village, and the animal-driven carts have slowly begun to give way to Chinese motorcycles and Japanese pickup trucks.

The oldest man in the village, Lang Loi Di, spoke of how as recently as 20 years ago, there were no goods brought in from the outside, that everything was grown and made in the village, from cloth to crops to vices. “We grew our own tobacco and distilled our own alcohol. In the past 20 years, the cigarettes and whiskey from outside came here. I have no idea where this stuff comes from.” 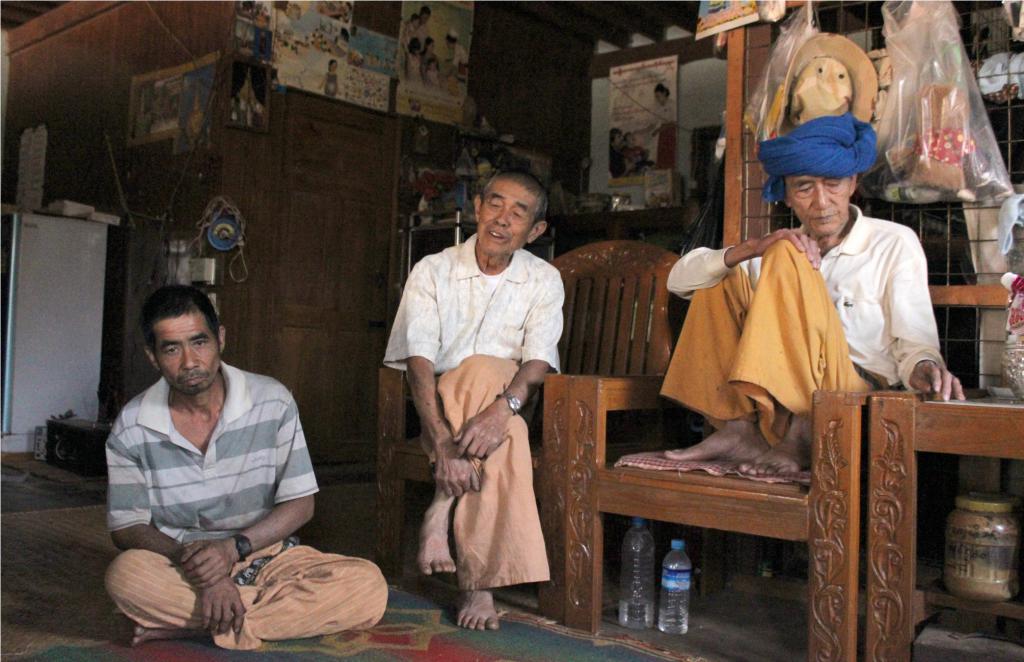 Left to right: Wan Sark Messenger Ban Ma La, Village committee member Law Loi Na Ling, and village elder Lang Loi Di. Lang Loi Di does not know his exact age, but said that the last time he saw a foreigner was when he was five or six years old and the Japanese military launched incursions into their region. In the past three years, a road was built to their village.

As a result of the civil war period, a unique communication system exists as a relic of the turbulent past. In the past, said Lang Loi Di, there were, “no messages and no messengers,” a result of the self-sustained lifestyle previously practiced in the region.

Now, modern communication exists, but it is hard to come by. It is common for drivers to have extensive knowledge of certain spots in the road where a cellphone signal can be reached, and even this is unreliable.

For more important communications, there exists a unique system of relay messengers, who bring memorised spoken messages from village to village, often up the sides of mountains to extremely remote villages.

The messengers are chosen by the village headman for their skills, ranging from good memories to knowledge of the region’s villages to an ability to travel discreetly and stealthily with sensitive information. Three messengers are chosen at a time, and together they serve for a year, when they are typically replaced so that they may go back to their farming full time.

One messenger, a shy, tattooed 40-year-old man named Ban Ma La, could be found at his usual posting on the front porch of a general store and home of one of the village elders. His job consists of waiting every day for messages to come into town, and then spreading the word around town or passing the message onto the next village. When asked why he was chosen for the job, Ban Ma La paused for a long time, unsure how to praise himself. Finally, he said that he had sense of responsibility for the country, and felt the need to be a protector.

This job is believed by some to go back about 40 years, as a first warning system for incoming battles, and a communication system between various armed groups and villagers. The nature of the work changed since the ceasefires went into effect. Their previous primary duty, warning villages of approaching fighting, has been largely supplanted. Today, most of the work involves tamer messages, informing teachers in the countryside that paychecks have arrived, summoning people and helping them go to different towns, and coordinating between the Shan State Army and local village leaders. They continue to act as watchmen, however, and continue to watch for suspicious people and report back to village headmen.

Previously, the duty was done solely on foot, but the advent of road networks in recent years has meant that some of the work may be done by motorcycle. However, the roads don’t go everywhere, so there is still plenty of hiking to be done. As this is done by relay, one messenger going to the next village and passing it on, the journeys rarely bring them more than a few days from home as well.

Although the telephone service is becoming more viable, Ban Ma La feels that his job is not in jeopardy.  Even with phones, he said, people will still use this new tradition of messengers as the most reliable form of communication for a long time.

Village headmen and the informal police

In this area, each village is ruled by a semi-democratic system, where each household casts a vote for a village headman, who appoints the rest of the government, from the watchmen to the head of education to the village police. On headman named Na Ling Da agreed to an interview, and spoke of his duties.

His job didn’t require daily work, not surprising for a village of his size. His major headache during the time we spoke was coordinating with the army for the paving of the only road in town, and placating the farmers who had to give up some cropland for a potential trade route.

Becoming headman requires the trust of the community. Na Ling Da was deputy headman before his promotion, and said that he won his seat by being a good evaluator of people’s skills. Years ago, the headman chose him to decide who would be chosen for what posts, and this gained him influence and respect in his community. This seems to be a theme these communities leadership; with so few people to master every problem in the village, the leaders’ most important job is to recognise and use the skills of their constituents.

The headman also has help from another member of the village, who acts as a town sheriff and enforcer. His said job is part-time and sporadic, however, as the reported crime rate of these close-knit villages was fairly low. Most punishments relied mostly on social degradation. He said, for example, that anybody who was caught stealing a chicken was first given a warning, and then on second offence, forced to wear a headless chicken around his neck for several days as punishment. This sheriff, according to the headman, was chosen to be the smartest man in the village, and was responsible for outwitting criminals and arranging security for festivals to defend against outside disturbances.

It is unclear how often the SSA becomes involved in dispute resolution. Headman Na Ling Da said that problems often went to the army, who were the ultimate judges for their region. However, in a separate interview with the local army leadership, they insisted that they had set up civilian courts, and only intervened occasionally.

Nevertheless, in these ceasefire zones, Naypyitaw’s cautious nod has given BGFs autonomy to act as de facto rulers, but they in turn must preside over traditional communities that have just begun to wake up to the larger world.

The recent breakdown of the ceasefire in the Kokang region has shown the fragility of the situation in Shan state’s ceasefire zones. Even where things are relatively calm, where hotlines, ceasefire and economic cooperation exist between the resistance armies and the government – the situation remains tense, even with talk of a more lasting peace.

Until trade links and communication can be effectively spread into ceasefire zones, they will still remain cut off from the changes in Myanmar as a whole.