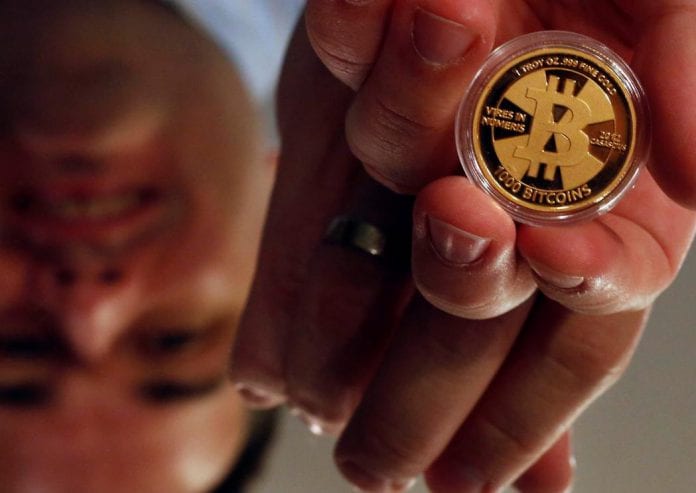 The price of the digital currency bitcoin soared above $1,000 for the first time on Wednesday last week, extending a 400 percent surge in less than a month that some see as a growing bubble in an asset that is still a mystery to many.

Bitcoin hit a high of $1,073 on Tokyo-based exchange Mt Gox, the best-known operator of a bitcoin digital marketplace, compared with just below $900 the previous day.

At the beginning of the month, bitcoin, a prominent digital currency that is not backed by a government or central bank, traded at around $215. The spike in its price has some believing that it has become overvalued in a short period of time, owing to its limited supply and increasing demand.

“A narrow asset class and lots of liquidity is the perfect environment for a rapid burst up in value, and then corrections,” said Sebastien Galy, a currency strategist at Societe Generale in New York.

Bitcoin trades 24 hours a day, every day. The supply of the currency, which is “mined” by solving math problems, is limited, and recently stood at 12 million bitcoins, worth about $12.9 billion at recent prices.

Bitcoin is not backed by physical assets and is not run by any person or group. Its value depends on people’s confidence in the currency. It has been gaining acceptance by the general public and investment community but has yet to become an accepted form of payment on the websites of major retailers such as Amazon.com.

Earlier in the month, the US Senate held a hearing on virtual currencies, with some officials expressing concern that it is notable for its use in criminal activity and that there is a lack of regulatory oversight.

But bitcoin advocates say the Senate hearing gave more legitimacy to the currency, in part fuelling the gains.

“It isn’t just the bitcoin community saying that bitcoin is used for good things and there’s a lot of great potential. We have members of Congress and government agencies who all agree,” said Jinyoung Lee Englund, spokeswoman for the Bitcoin Foundation in Washington.

Bitcoin is valued by many users for its anonymity. But government officials expressed concerns that many virtual currency services do not have the proper controls in place to prevent illegal activities such as money laundering.

“Virtual currencies, perhaps most notably Bitcoin, have captured the imagination of some, struck fear among others and confused the heck out of the rest of us,” Senator Thomas Carper told the Senate Homeland Security Committee earlier this month.

In October, federal authorities shut down an online marketplace called Silk Road that was used for purchasing drugs and hiring hit men. Authorities seized $3.6 million worth of bitcoin, which was used instead of cash or credit cards to complete transactions on Silk Road.

More than 200 bitcoin businesses and other merchants participated in a bitcoin Black Friday shopping event, where users can buy everything from airplane tickets to Christmas trees to organic beer. Reuters