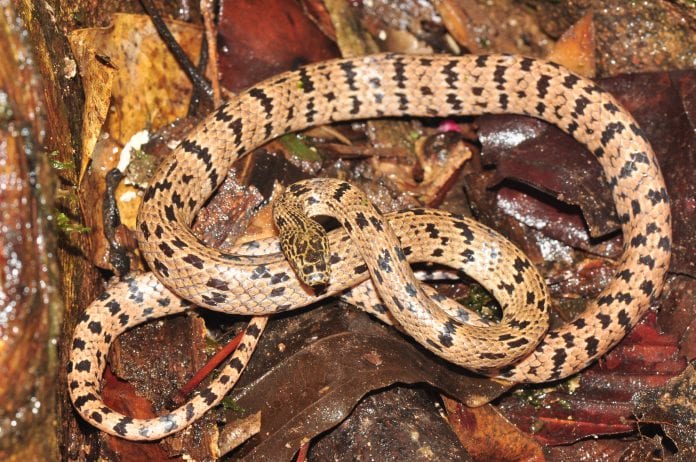 A soul-sucking “dementor” wasp, a bat with nightmarish fangs, a stealthy wolf snake and the world’s second longest insect are among the 139 new species discovered by scientists in the Greater Mekong region in 2014. Many are already at risk, according to a new report, “Magical Mekong,” released last week by WWF. Six new species were discovered in Myanmar.

In total, 90 plants, 23 reptiles, 16 amphibians, nine fish, and one mammal are detailed in the report. They include a feathered coral whose nearest relatives live in Africa, four moths named after Thai princesses, a colour-changing thorny frog and two orchids discovered already being traded.

This brings the total new species discovered in the Greater Mekong,  which includes Cambodia, Laos, Myanmar, Thailand and Vietnam, to 2,216 between 1997 and 2014 – an average of three new species a week.

“The Greater Mekong’s unique ecosystems are truly the gift that keeps on giving, providing sanctuary for a treasure trove of species and critical benefits for millions of people across the region,” said Teak Seng, conservation director for WWF-Greater Mekong.

“As Magical Mekong reveals, the scientists behind these discoveries feel they are racing against the clock to document them and strongly advocate for their protection before they disappear,” Seng added.

“We’ve only skimmed the surface of new discoveries in the Greater Mekong,” said Dr Tom Gray, manager of species conservation for WWF-Greater Mekong. “However, while species are being discovered, intense pressures are taking a terrible toll on them. One wonders how many species have disappeared before they were even discovered.”

WWF said rangers urgently need more support, equipment and training, along with enhanced law enforcement efforts targeting criminals involved in the illegal trade in wildlife and timber. The American nature conservation agency said a commitment to protecting key wildlife habitat is also crucial, with countries cooperating across borders to make sustainable decisions on issues such as where to construct large infrastructure, like roads and dams.

“Seeing these incredible new species discoveries – from a colour-changing thorny frog to the historic 10,000th reptile species — gives me hope for the future of the Greater Mekong,” Gray added.

“Whether it’s conducting critical field research or training forest guards, WWF and its partners are working to ensure that these species – and those yet to be discovered — are protected for generations.”

– Thailand’s Ampulex dementor wasp, which was named after the soul-sucking dementors from the Harry Potter books. Its venom turns cockroaches into passive zombies before it devours them alive.

– Equally fearsome, the long-toothed pipistrelle bat has extremely long fangs. But this bat has more reason to fear humans, as its habitat in Laos could be lost due to dam construction and quarrying.

– A crocodile newt species in Myanmar may also be in trouble as its core breeding habitat – a pond on a university campus – is threatened by a construction project. And it is already in demand from the international pet trade, with two of the newts found in pet stores as far away as Europe.

– Also on the market are two new orchid species discovered in Bangkok’s famous Chatuchak Market. The scientist who discovered them almost didn’t publish his find because he feared it could spark a rush to collect them. But he realised that they need to be recognized by science to gain protection.

– The world’s second largest insect, a stick insect that measures 54 cm, was found less than one kilometre away from a village in northern Vietnam.

– A stealthy wolf snake has a distinctive “flying bat” pattern that helps it to blend in with the tree bark and mosses that characterise its home in Cambodia.