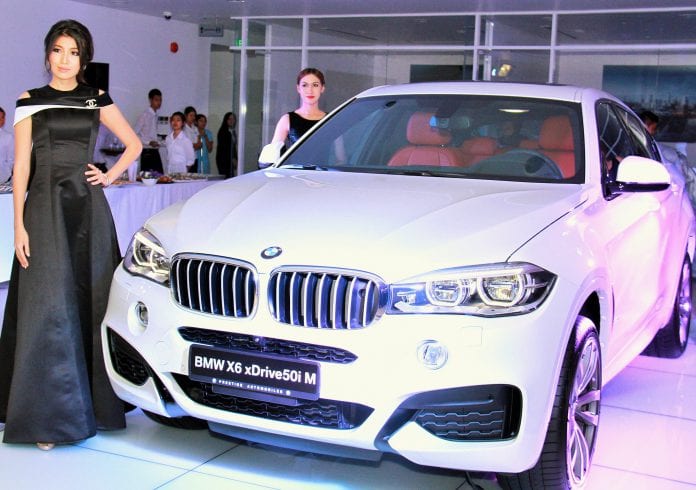 “The new BMW X6 offers a majestic performance with noticeably greater dynamic ability at a reduced fuel consumption rate by as much as 22 percent thanks to BMW EfficientDynamics features,” said Chan Mya, managing director of Prestige Automobiles.

The interior combines big space with model-specific features, while design and equipment packages are one of the highlights of the new BMW X6.

The new BMW X6 became available for viewing since March 7, at the new BMW sales and service facility located at 485, Corner of Pyay Road and Narnattaw Street, Kamayut township.

Prestige Automobiles opened the first BMW facility in Myanmar on 15 November last year. The premium car brand building includes a service centre with four working bays that can service up to more than 200 cars per month. The aftersales facility also comes with body and paint repair services that can handle cosmetic and structural repairs of damaged vehicles. 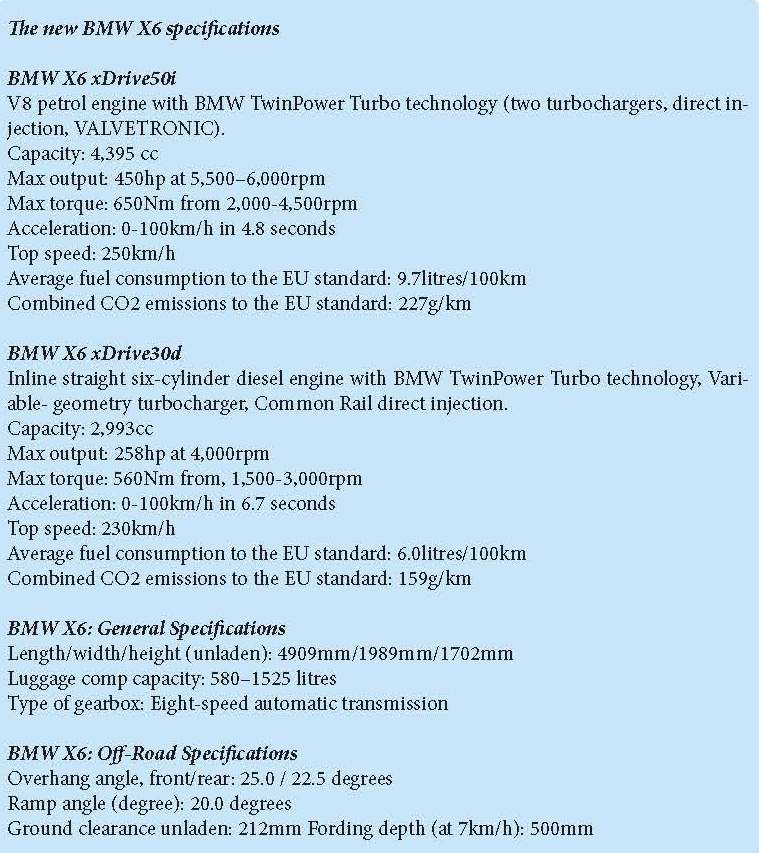 TwinPower Turbo technology: The engine for the new BMW X6 is a V8 petrol unit. The latest version of the 4.4-litre engine at the heart of the new BMW X6 xDrive50i increases the predecessor model’s maximum output by 10 percent – to 450hp (+43hp) – yet posts a 22 percent drop in average fuel consumption. The engine’s suite of BMW TwinPower Turbo technology now has Valvetronic variable valve timing alongside its two turbochargers and High Precision Direct Petrol Injection, endowing the eight-cylinder engine with improved responsiveness, pulling power and extra efficiency.

The BMW X6 xDrive30d’s 3.0-litre diesel engine benefits from BMW TwinPower Turbo technology comprising a turbocharger system with variable inlet geometry and common rail direct injection. The straight-six unit generates a maximum 258hp (+13hp) and peak torque of 560 Newton metres between 1,500 and 3,000rpm. This increase in muscle paves the way for acceleration of 0 to 100 km/h in 6.7 seconds (+0.8 seconds improvement).

Intelligent all-wheel drive and torque vectoring: By constantly shifting drive between the front and rear wheels as required, BMW xDrive provides a special take on the driving pleasure claimed by BMW. The link-up between the all-wheel-drive system and DSC (Dynamic Stability Control) allows the drive split to be adjusted in advance.

Chassis and body: BMW claims the car’s sporting prowess and versatility have been optimised, as have ride comfort and safety. The combination of a double-wishbone, double-joint front axle and the integral rear axle patented by BMW, underpins a blend of agility and ride comfort. Further improvements have been made in the car’s directional stability, the friction coefficient of the wheel bearings, tyre noise and weight, which has been reduced by 2kg at the front axle alone.

Overall, the expanded standard specification of the new car compared to its predecessor has not led to higher numbers on the scales. In fact, given identical equipment levels the new BMW X6 would be up to 40kg lighter, depending on the model.