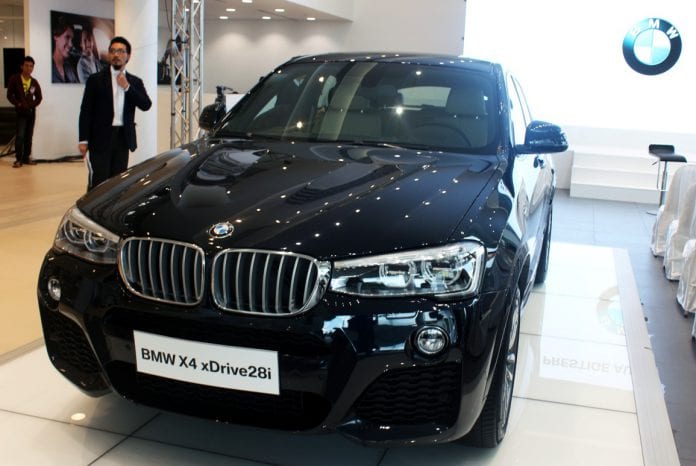 BMW Asia and Prestige Automobiles, the authorised BMW importer in Myanmar, have launched the new BMW X4 in Myanmar, the firms said.

The car features the German automaker’s ‘BMW Efficient Dynamics’ and ‘BMW xDrive’ technologies that contribute to better road safety and driving dynamics, according to BMW.

“The performance of the BMW X4 is achieved through BMW Efficient Dynamics technology, which is a comprehensive package of innovations that enable greater power without compromising on fuel efficiency and CO2 emissions,” said Chan Mya, managing director of Prestige Automobiles.

“It comprises intelligent energy management and lightweight construction, as well as aerodynamics and engine efficiency measures,” he added.

The new BMW X4 xDrive28i retailed in Myanmar is powered by 2.0 litre four-cylinder petrol engine. It is capable of achieving maximum power output of 245hp and can accelerate from 0-100km/h in 6.4 seconds. According to BMW, its average fuel consumption is 14km/litre and its CO2 emissions stand at 169g/km.

“The new BMW X4 comes equipped with BMW xDrive – an intelligent all-wheel drive that actively manages the drive power split between the front and rear wheels constantly. The intelligent technology is able to ‘think’ a step ahead, thereby enabling the driver to enjoy safety and agility even on fast bends by shifting power distribution variably between the front and rear axles to best suit the driving situation and road condition.

“It can even calculate the best way to move in a bid to prevent any oversteering or understeering,” Chan Mya said.