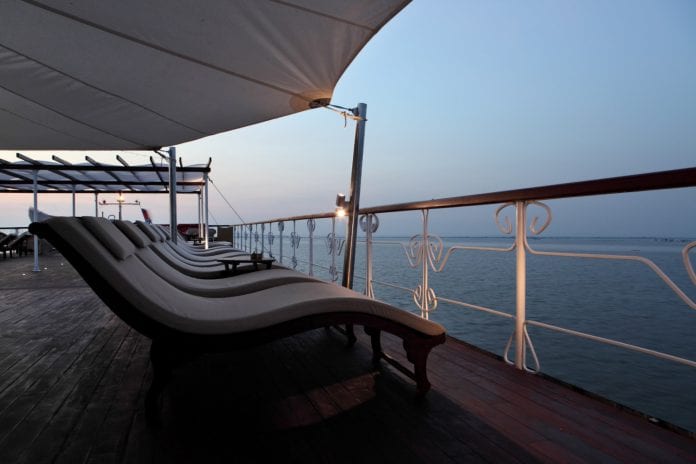 Heritage Line said the cruiser has the largest cabin space on the Irrawaddy, and the highest crew to passenger ratio, while it offers the “finest onboard experience” in Myanmar.

The newest Myanmar cruise is going to set its first sails in September 2015.

Built to resemble a British colonial paddle steamer, the 65-metre-long Shin Arahan features three spacious decks and 23 luxurious cabins. With its white rails, polished lacquer, intricately carved woodwork and shining brass, the cruiser said it aims to take guests back in time to an era of bygone elegance.

The firm said when building the Shin Arahan, it sourced materials, handicrafts and fine arts from the best artisans and artists throughout the country.

The private staterooms and public venues showcase the talent of local artists, many of whom employ traditional skills passed down for generations, it said.

Shin Arahan was a monk of the Pagan Kingdom from 1056 to 1115. The monk, a native of Thaton Kingdom, was the religious adviser to four Pagan kings from Anawrahta to Alaungsithu. He is credited with converting Anawrahta to Theravada Buddhism, and overseeing the subsequent reformation of the Buddhist school throughout the kingdom.

Named after some of the most magical temples in Bagan, the Shin Arahan offers three Junior Suites: the Ananda, the Bupaya and the Mauna. Combining dark, regal wood with the bright oranges, saffrons and greens of the floral offerings presented at temples, these suites offer a seating area and a private balcony from which to enjoy the beauty of the Irrawaddy.

Located on the Terrace Deck, each of our two Executive Suites include an indoor seating area and a private balcony. Polished wood, locally-made brocade and artefacts collected in Mandalay, Bagan and Yangon create a relaxing yet exotic ambiance. These suites are named after two of Bagan’s most intriguing temples, the Hindu temple of Nanpaya and the Buddhist temple of Sulamani.

The Shin Arahan offers two opulent Royal Suites, the Yazakumar, named after a Bagan Dynasty prince known for his filial love and piety, and the Arahan. Equipped with a private terrace and a private Jacuzzi, these suites feature elaborate woodcarvings, fine works of Burmese art, and handmade artefacts commissioned throughout Myanmar.

MyanmarTour.com by Holiday Indochina will be the first agent offering deals for the opening of Shin Arahan.