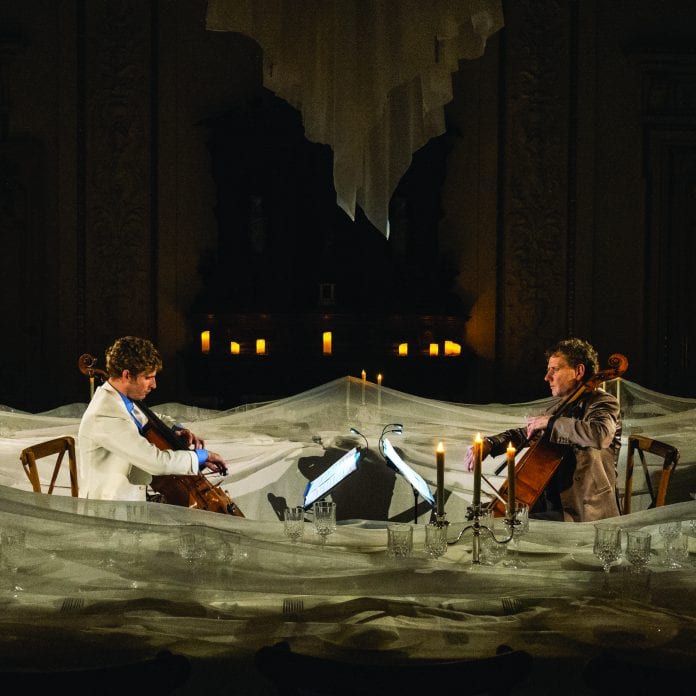 FLORENCE, Italy
Consistency is a tough sell in an age of obsolescence. Say what you will about sustainability, few 21st-century habits die harder than consume and discard.
Thus, when a label like Brioni decides to celebrate its 75th anniversary with an elaborately staged presentation in a Renaissance palace and follow it with a seated dinner, the risk is the effort will come off as counterintuitive theater, something as forced and creaky as an Elvis revival.
That it can succeed in so magical a manner as the Brioni event January 7 achieved owes much to what Tommaso Sacchi, deputy mayor of design and fashion for Florence, called the city’s unique advantage. “Our most competitive asset is our ability to use the multiple stages of the city simultaneously,” Sacchi said, referring to the hundreds of historic buildings far from the tourist track. “That is our advantage and why we are winning over Milan.”
But what remains to be seen is whether Brioni can conquer a new generation of male consumers. Will deep-pocketed young guys follow rapper Drake to Brioni, forgoing their Allbirds and a Topshop hoodies for stuff like unlined deerskin blazers with spooky price tags and styling so quiet you would never know who made them?
That is the wager being made by Kering, the multinational behind Brioni as well as Balenciaga and Gucci, two labels that have come not only to define the luxury goods sphere but to dominate what even designers like Virgil Abloh – artistic director for menswear at Kering’s big competitor, Louis Vuitton – have termed a burgeoning “post-streetwear landscape.’’
Perennially heard here during the big menswear trade fair Pitti Uomo is a wistful belief in the return of tailored clothing. The reality, of course, is that the suit never went away.
Way back in 2000, major investment banks like Goldman Sachs and Morgan Stanley Dean Witter (as it was known then) had already joined the growing ranks of companies whose dress codes no longer required a suit, in part because – as Time magazine noted – “a generation of business school graduates has decided that working in someone’s garage, in jeans, with the potential to make millions in stock options’’ was more interesting than scrambling up the corporate ladder dressed like your dad.
Naturally it was digital culture that helped drive the transformation. Yet like so much else in the tech sector, the “casualization’’ of the workplace had a whiff of the bogus. Those nothing-looking black turtlenecks Steve Jobs made into a uniform? They only looked Gap generic. In fact, they were custom-made for him in cashmere by Brunello Cucinelli.
So, too, are the signature gray T-shirts worn by Facebook chief executive Mark Zuckerberg, which reportedly cost him $300 apiece. And, when Cucinelli invited a bevy of billionaire pals – among them, Jeff Bezos – to visit his headquarters in Umbria last summer, he was cultivating an existing consumer base.
“Casual luxury’’ is a Cucinelli mantra. In market terms, his label has come to define the space described by that amorphous notion. Still, Cucinelli’s consumer is the one who Brioni – and Loro Piana and most of the other luxury menswear brands – is trying to wrest away with its aggressively elegant cashmeres and alpacas and silks of impeccably neutral cut and in colors (tobacco, sand, earth and cream) that barely register as such.
From the perspective of an observer who has watched from the sidelines as Brioni whipsawed through three chief executives and four creative directors in just five years, there is reason to believe that the label – founded in Rome in 1945 by master tailor Nazareno Fonticoli and his business partner, Gaetano Savini – may finally have corrected course. With Norbert Stumpfl installed as executive design director, it at last looks ready to do combat with the likes of Cucinelli and on marketplace terms that until now he has largely defined.
“What we are hoping,” said Stumpfl, “is that people will appreciate the collection for our label’s history, the tailoring, the incredible craftsmanship that exists and not because the clothes shout the Brioni name.”
Stumpfl was standing on a shadowy stair landing of the centuries-old Palazzo Gerini, whose Baroque mirrors and confectionery frescoes were illuminated for the evening by the light of electric candles. In each of a series of six adjoining chambers, 23 musicians dressed in Brioni jackets, suits, tuxedos and even a tailcoat played pieces like Erik Satie’s “Gnossienne I” and Francesco Landini’s “Ecco la Primavera” transcribed for wind instruments.
Later, a group of 60 guests invited by François-Henri Pinault, Kering’s chief executive, drew up to two long tables in a gilded salon for a seated anniversary dinner of vegetarian dishes (a curious selection of cuisine in Italy’s most Paleo city) followed by a mini-concert.
And Cucinelli, in the ballroom of a 17th-century opera house, would simultaneously host a rival seated dinner for 350 guests.
Florence is now, as ever, a city of warring factions; Cucinelli and Brioni are modern-day versions of the Guelphs and Ghibellines.