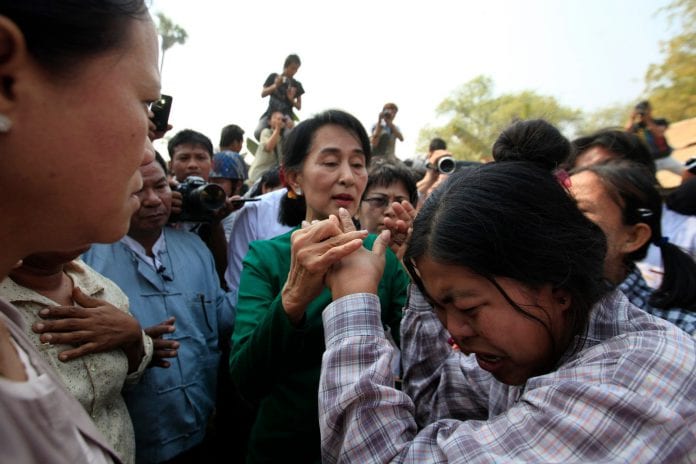 Through a combination of land compensation and corporate social responsibility activities, the operator of one of China’s largest investments in Myanmar hopes to recommence operations after a year’s delays and wrangling.

Dong Yunfei, a manager at the Yangon branch of Wanbao Mining, the Chinese State-owned company that operates the Letpadaung copper mine, wrote in an e-mail to the Global Times that the company will pay extra subsidies ranging from K300,000 to 1.2 million ($300-$1,200) for an acre of land to farmers who make way for the project, based on the instructions of the Myanmar government.

This is the company’s third compensation offer.

About 40 percent of villagers refused compensation, the company said.

“Even though the project has resumed, we have no way to proceed due to the land issue,” said Zhuang Yongquan, an engineer at Myanmar Wanbao Mining Copper, standing atop a red rock mountain and pointing across plains dotted with trees and farmland.

With an annual capacity of 100,000 tonnes of cathode copper on a planned area of 7,877 acres (32 square kilometres), the mine is located in the Monywa copper mining area of northern Myanmar’s Sagaing region, about three hours’ drive west of Mandalay, the country’s second-largest city.

U Hla Tun, minister of the President’s Office who also chairs the implementation committee working for the government’s Letpadaung investigation commission, told the Global Times that the committee had raised compensation.

“With increased compensation, I think there’s a greater possibility that villagers will take it,” he said.

The company and the government had made extensive efforts to improve the livelihood of villagers, Hla Tun said.

“Before Wanbao’s donation, villagers had neither water nor electricity, but now the company and the government have helped fund power and water facilities for their benefit and villagers really appreciate it,” he said.

“I feel that the villagers will trust us more as time passes. We believe strengthened communication will make the situation better over a period of time.”

The former Myanmar military junta approved the Letpadaung project in 2010, with a total investment of $1.07 billion.

Myanmar then began making its transition from military rule to a quasi-civilian democracy led by President Thein Sein who took office in March 2011.

In November 2012 the project was halted by demonstrations of villagers supported by activists and some opposition parties, protesting inadequate compensation and potential environmental damage.

The demonstrations eventually led to a police crackdown, injuries to villagers and monks, and prompted the government to set up a commission led by an opposition party leader to investigate the project’s feasibility.

In March 2013 an investigation by the commission supported continuation of the project provided investors made necessary improvements.

In July 2013, a new contract was signed with the profit-sharing ratio revised from 4:45:51 between the Myanmar state company Myanmar Mining Enterprise, UMEHL and Wanbao to 51:19:30.

Under the new contract, Wanbao will also invest $2 million annually for mine reclamation and invest $1 million in corporate social responsibility (CSR) activities before beginning production. In addition, all investors will allocate 2 percent of their net profit to CSR activities throughout the project.

China is the largest investor mostly in hydropower, mining and gas and oil projects in its impoverished Southeast Asian neighbour which has suffered from decades of economic stagnation, corruption and sanctions.

Chinese companies lead actual investment in Myanmar with $14.12 billion, or nearly 42 percent of the total $33.67 billion, from 1988 till September 2013, according to figures from the Myanmar Investment Commission.

Myanmar people often fear the big investment projects, rooted in Myanmar’s military past, that appear to exploit natural resources more for the benefit of its investors than for its local residents.

The Letpadaung copper mine is not the only project to suffer setbacks.

In September 2011, Myanmar President Thein Sein ordered suspension of the $3.6 billion Myitsone Hydropower Project in upstream Ayeyawady River as a result of opposition from residents. That project was backed by China Power Investment.

Following suspension of the project, Myanmar witnessed a sharp fall in its foreign direct investment as Chinese investors feared political uncertainty might cause heavy losses.

Chinese companies tend to speak to the big bosses and exert a top-down influence, a policy that worked well under the Myanmar military junta, said Li Zuqing, a Myanmar-based ethnic Chinese and dean of the Mandalay-based Fuqing Computer and Language School, “but that no longer works nowadays [as people demand democracy and transparency].”

The Chinese company’s fledgling CSR activities are little known by the Myanmar general public as they do not have a spokesperson and it is hard for local media to speak to the company, May Thingyan Hein, CEO of Myit Ma Kha News Agency, told the Global Times.

She believes that Wanbao lacks transparency and should publish its compensation standards so that the media can supervise its allocation and distribution among the people.

A group of villagers who are also newly recruited workers at an orientation training for Wanbao told the Global Times that they are glad of a job, and hope the project can start production soon so that they can get higher pay.

Some countrymen are unwilling to sacrifice their plot of land as it is the only heritage they can pass on to the next generation, they explained.

New workers at the company can earn about $1,200 in annual salary, which compares with $3,000-$5,000 annual income a household can make farming, said U Than Lwim Lwim, a 36-year-old villager.