HomeMMBIZ NewsBuy A Fleet, Get a Free Hilux
MMBIZ News

Buy A Fleet, Get a Free Hilux 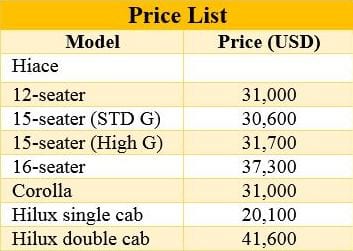 U Aung Myo Thant, marketing officer of Mingalar Motor Co Ltd, said if customers buy at least 10 units of certain Toyota models, one car will be given for free.

“We are doing this promotion as the market has frozen during the monsoon period. If the customers buy according to our promotion program, they can get a car for free,” he told Myanmar Business Today.

According to the promotion, if the customers buy 10 Hiace vans they will get one Hilux single cab free; while 14 units of 12-15 seat Hiace will get customers one 12/15 seater Hiace or one Corolla. Forty-five Hiaces comes with a free Toyota Landcruiser and seven Hilux double cabs come with one free Hilux single cab.

Since the launch of the promotion on June 1, 40 cars have been sold, U Aung Myo Thant said, adding that more new cars will arrive in July. The promotion period will go on until August 1.

Customers have to put in a deposit of five percent of the total purchase amount to confirm an order.