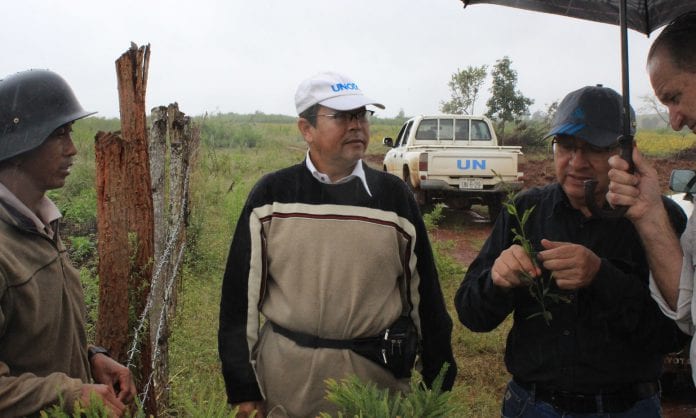 In the hills in southern Shan state surrounding Taunggyi, up a tangle of roads barely passable in a Hilux, deep into an ocean of opium poppy fields barely clinging to the hillside, a few islands of other crops have sprung up. They are most prominently coffee and rubber – all part of a UN effort to guide farmers away from drug production with the promise of sustainable crops and stable income.

The farmers growing the coffee are all either former or current opium growers, mostly from the Pa’O and Shan (Dai) ethnic groups. After the Pa’O National Army signed a ceasefire with the government in 1997, opium cultivation exploded in their three mountainous townships, along with the surrounding regions, with widespread social ramifications. Recently, the greater area has been at the front of a United Nations Office of Drugs and Crime (UNODC) alternative development project, bringing agricultural talent from South American projects to try to replace the rapidly spreading narcotic.

The project is still in its initial phases, working with only 500 households, and the coffee plants far from maturity. Still – there is hope that these farmers will be the vanguard of a larger agricultural shift; that their success will convince more farmers to make the switch from fast, precarious drug money to a slower, more stable, and ultimately more profitable model on the cash crops of coffee and rubber, as well as food crops for local sustenance.

The need for alternatives

The allure of the opium poppy rests in its cash yield; one hectare of land can yield 15 kilograms of opium, each kilogram fetching up to $500. This concentrated wealth can be grown in areas with poor transportation, as a harvest of opium can be transported on foot, impossible with other traditional crops such as rice or corn.

However, this form of intensively grown opium has scarred the hillside, leading to erosion, soil degradation, and near-desertification of some areas. Crop yields are estimated by UNODC to be decreasing each year, as low as 6kgs per hectare for some farms.

Additionally, the Myanmar government is keen to show the international community their nominal commitment to drug eradication, and sometimes destroys poppy farms. This, along with opium’s vulnerability to heavy rain during harvest, creates a high degree of risk and vulnerability for farmers.

Constant exposure with drug distributers also increases the risk of drug addiction. “Opium use is not a major problem in Pa-O, but when [drug distributers] come to buy the opium, they often give some payment in amphetamines,” said Khun San Lwin, chairman of the Pa-O Self-Administered Zone in southern Shan state. 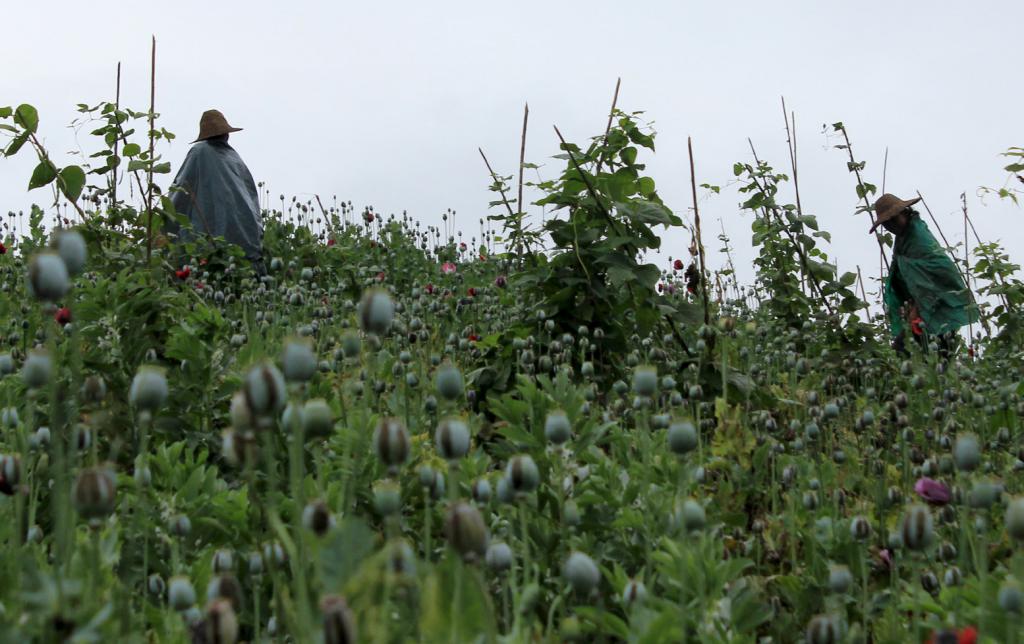 Farmers tend to an opium crop in southern Shan State.

Surveys and reports have been happening for years, but the project got its grounding this year, when UNODC provided seeds, assistance, and technology to a carefully selected group of pioneering farmers, selected according to their competence, availability of labour and commitment to the program.

The program’s ultimate economic viability relies on the availability of land along with the precise mix of crops intended to halt soil erosion, provide income, and make this method of farming competitive to poppies.

The main constricting factor in opium production is the labour needed at harvest time. The price of hired hands limits the amount to which a single household can harvest opium from their poppy fields.

Coffee and rubber, though, can be harvested by individual households, reducing farmer’s dependency on the local labour market, according to Jochen Wiese, country director for UNODC.

A shift away from poppy production can impact these farmers’ ability to put food on the table in the short and medium term, so beans and bananas are planted to provide fast food to eat, trade and sell.

Farmers in the hill regions have been willing to use some of their own land to grow coffee, and those in the lowlands received plots from the UN, previously unclaimed after fighting. “The land is organised, it is just a matter of relocating the people,” said Wiese.

Myanmar’s coffee consumption is unimpressive, especially for the expensive, high-grade varieties the UNODC is teaching the farmers to produce. According to a The International Coffee Organization report, Myanmar’s per capita coffee consumption was only 0.3kg per year, less than one third of Thailand’s and one twelfth of Japan’s. With the rise of the Myanmar middle class and recent flood of western expats and tourists into the country, demand will presumably increase.

Hopes seem to be pinned on China, whose consumption of coffee has been steadily increasing, and has a constant need for rubber for industrial use.

At a meeting between UNODC and coffee farmers, the locals expressed optimism and pride regarding their newfound cash crop, but had pressing questions about the coffee market, understandable for a new plant, grown in Shan state, but previously unknown to these farmers. Nevertheless, they have committed time and resources to the issue, and most have placed faith in these foreign experts enough to carry on to harvest time.

A long wait for harvest

It takes years before coffee plants are mature enough to harvest, and rubber can take even longer. The program was only recently established, and farmers have yet to see profits from their work. Due to this, many farmers continue to grow opium to provide immediate income before the coffee plants mature.

“I am no longer farming opium, although some others are. I grew opium for three years, but now make my living growing sticky rice, corn and white sesame,” said Sai Maung, one farmer receiving assistance from UNODC.

According to Wiese, government opium eradication can create an emergency situation for farmers, leading the UNODC to attempt to coordinate with the government to avoid the destruction of their beneficiary’s illicit crops.

The project is in the process of expanding rapidly, introducing reforestation projects as well as transportation improvements. It is aimed at the long-term, with the ambition of proving to local communities that coffee can stimulate their livelihoods more than opium’s long-term effects can depress it.

By providing alternatives where few existed previously, the UNODC hopes to guide the invisible hand of economics and move farmers away from the opium trade.

Until that time, these farmers are tending their crops solely on trust. For some time to come, they will have never tasted a cup of coffee.