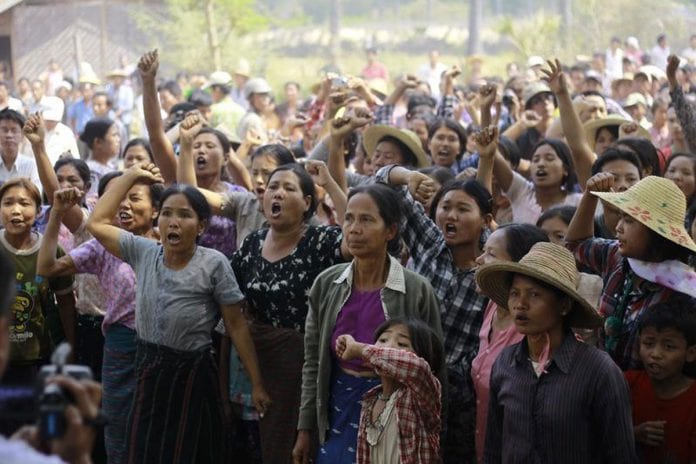 A new report revealed that Canadian and Chinese mining companies have profited from, and in some cases colluded with the authorities in human rights abuses and illegal activity around a copper mine in Northern Myanmar.

British human rights group Amnesty International in its report “Open for Business? Corporate Crime and Abuses at Myanmar Copper Mine” described how large-scale forced evictions and pollution linked to the mine have destroyed livelihoods and exposed thousands of people to health risks around the Monywa copper mine complex, which includes the notorious Letpadaung mine.

The report said community protests was met with excessive force by police, including, on one occasion, the use of white phosphorous, a highly toxic and explosive substance. Amnesty International said it also found evidence of illegal activity including possible breaches of economic sanctions.

“Myanmar offers the perfect storm of a rich natural resource base, a weak legal system and an economy dominated by military and special interests. The government has forcibly evicted people, crushed all attempts at peaceful protest and displayed a complete unwillingness to hold companies to account,” said Meghna Abraham, Amnesty International’s Corporate Crimes Researcher.

“The Monywa project is a cautionary tale on investment in Myanmar, where corporate projects are too often marked by abuses and communities are ripped apart in the pursuit of profit. Construction of the Letpadaung mine must be halted immediately until rights issues have been addressed.”

The Monywa project comprises the Sabetaung and Kyisintaung (S&K) and the Letpadaung copper mines. S&K has been operational since the 1980s. Letpadaung is under construction.

In 1996 Canadian company Ivanhoe Mines Ltd entered into a joint venture with a Myanmar state company, Mining Enterprise No.1 (ME1), to set up the Myanmar Ivanhoe Copper Company Ltd (MICCL), in which both held a 50 percent interest. MICCL operated the S&K mine.

In 2007 Ivanhoe Mines decided to divest from Myanmar and established a third-party-Trust to which its Myanmar assets were transferred.

In 2010 it was announced that China North Industries Corp (NORINCO) and Union of Myanmar Economic Holdings (UMEHL), the economic arm of the Myanmar military, had entered into an agreement about the Monywa project, which includes both S&K and Letpadaung mines. Subsidiaries of Wanbao Mining Ltd (owned by NORINCO) operate both mines today. The process by which the ME1-Ivanhoe Mines assets transferred to the China-Myanmar military partnership of Wanbao-UMHEL has never been disclosed. 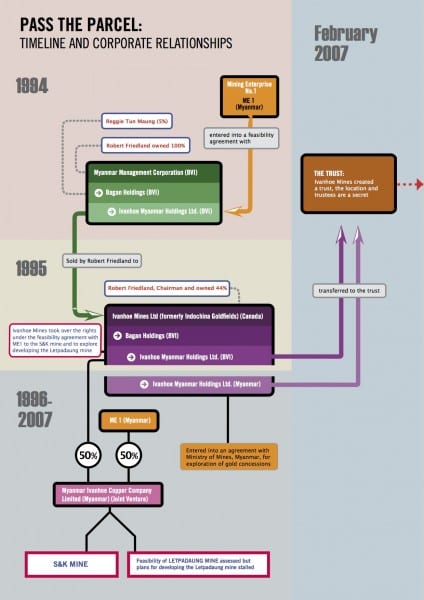 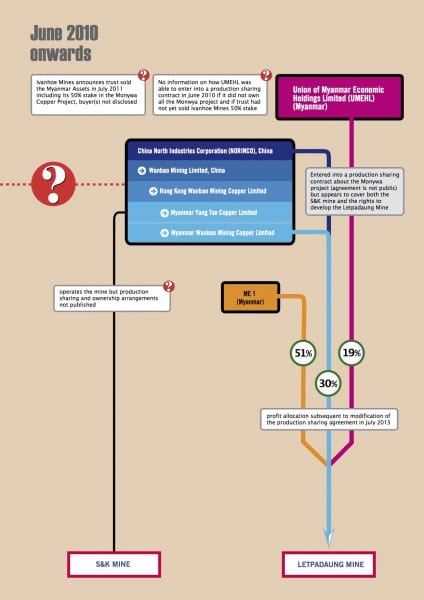 Amnesty International’s report includes evidence of thousands of people forcibly evicted in the 1990s, in violation of international law, to make way for investment by Canadian company Ivanhoe Mines (now Turquoise Hill Resources). The NGO said the company knew their investment would lead to the evictions, yet did nothing.

“It profited from more than a decade of copper mining, carried out in partnership with Myanmar’s military government, without attempting to address the thousands left destitute,” the group said.

Thousands more people forcibly evicted since 2011 to make way for the Letpadaung mine. Wanbao directly engaged in forced evictions, and colluded with the authorities, including by providing bulldozers to destroy crops, the report said.

It adds, in November 2012 security forces used white phosphorous in a deliberate attack on villagers and monks who were protesting the negative impacts of the Letpadaung mine. More than 100 people were injured, with some suffering burns and lifelong disability. The report says part of the attack was launched from inside the Wanbao company compound.

The use of white phosphorous by the security forces against the protestors constituted torture – a crime under international law.

In December last year one woman died and several other people were injured when police opened fire on protestors at the Letpadaung site. Protests against the mine have repeatedly been met by excessive use of force by police.

Amnesty said Ivanhoe Mines was involved, through its Monywa investment, in the sale of copper to a “who’s-who” of the Myanmar military, adding that these sales took place when economic sanctions were still in force.

“Ivanhoe lied publically about the copper sales, and its subsidiary may have breached UK economic sanctions,” Amnesty International said.

The report revealed that when Ivanhoe Mines divested from Myanmar it did so in a highly secretive process involving legal entities in the British Virgin Islands. Amnesty International’s investigation found evidence that Ivanhoe Mines and legal entities associated with the company may have breached Canadian and UK economic sanctions during the divestment.

“The people living around Monwya and Letpadaung have suffered more than two decades of abuse linked to the business operations of Canadian, Myanmar and now Chinese corporations. Investment can help Myanmar, but this project benefits the companies while harming the people,” said Abraham.