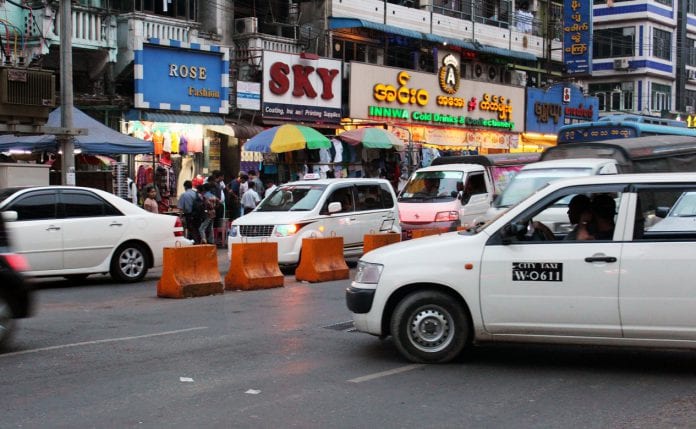 A regulation for buses to stick to the right-most lane in Yangon’s downtown roads is facing hurdles because of private cars and taxis that inevitably share the lanes, U Hla Aung, chair of automobile regulatory body Ma Hta Tha, told Myanmar Business Today.

The regulation was planned to be imposed on Strand, Merchant, Mahabandoola, Bogyoke and Anawrahta roads in six downtown townships but can now be implemented only on the Anawrahta road, Ma Hta Tha (Central) said.

The regulation saw concrete block barriers placed along the bus-specific lane throughout the designated section of the Anawrahta road to separate the bus lane and other parts of the road.

“There are private cars and taxis that need to enter the right-most lane such as the cars turning into or coming out of streets on the right side. But these cars take the bus lane earlier than they need to so buses are clogged behind them. And usually when the traffic signal turns green the buses don’t have enough time to make it past,” said U Hla Aung.

Ma Hta Tha officials and traffic polices jointly supervise the flow of the buses by allowing some buses to come out of the right-most lanes periodically through gaps arranged in intervals  to alleviate the jam during the peak hours, he said. Buses that go out of their designated lane are also being penalised.

Yangon Mayor U Hla Myint said at a press briefing recently that he felt “ashamed” for the need to place the concrete blocks all along the bus lane which he said is highlighting the discipline problem of the country. In other countries only a few barriers are necessary, he said.

U Thar Kyaw, head of the Disciplinary Department, Ma Hta Tha (Central), said the regulation on buses to stick to the right-most lane was imposed a long time ago but has been hampered by the shops that intrude upon the road.

“Now it seems taxi cabs and private cars on the right-most lane are making it impossible to use it to the full extent,” he added.

Many bus drivers complained that the concrete barriers hamper their driving and that a breakdown of a vehicle can hold up all the vehicles behind.