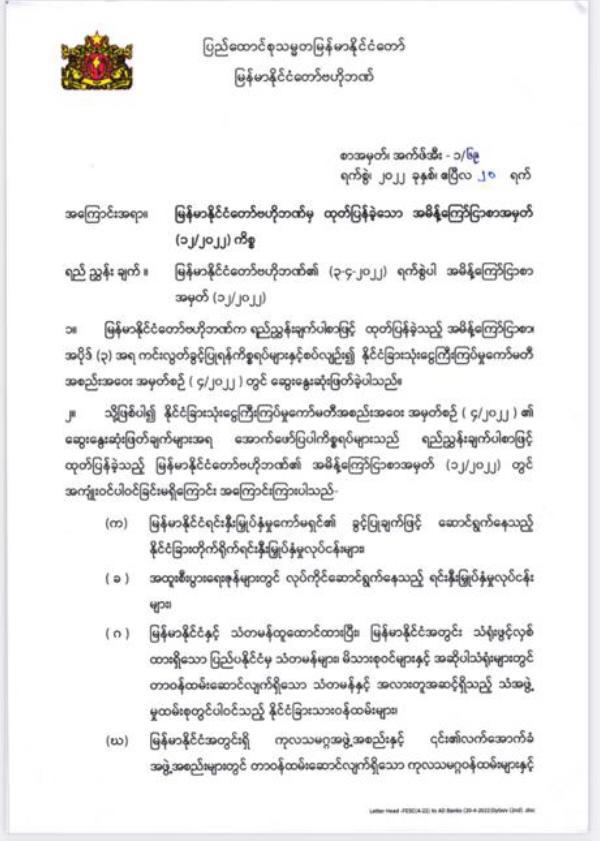 The Central Bank of Myanmar issued a letter to the Authorized Dealer (AD) license holding bank containing a list of entities and individuals exempted from the controversial foreign currency conversion requirement.

The Central Bank of Myanmar on April 3 issued a notification requiring all foreign earnings to be converted into Myanmar Kyat at the rate of MMK 1850 per dollar within one working day. Later, it issued another notification exempting the Ministries and government.

Then, the Foreign Exchange Supervisory Committee held a meeting and decided to exempt certain entities.

The entities not subject to the foreign currency conversion requirement are Foreign Direct Investments operating under the permission of the Myanmar Investment Commission; Investments operating in the Special Economic Zone, diplomats and family members as well as in-service foreign staff in diplomatic missions holding positions similar to the rank of the diplomat, UN employees and Myanmar citizens holding laissez-passer, foreign staff at the foreign development agencies and state/citizen-owned international airlines.

When providing services related to the trading of foreign currency for the organizations and entities exempted, AD license holding banks are to provide service only after processing Know Your Customer (KYC) and Customer Due Diligence (CDD) upon receiving related documents to confirm the organizations and entities exempted from the forced foreign currency conversion. Moreover, banks are also instructed to submit reports of the activities to the Central Bank of Myanmar.

The order of forced conversion of foreign currency earned has stirred criticism and some observers link this order to fuel shortage.