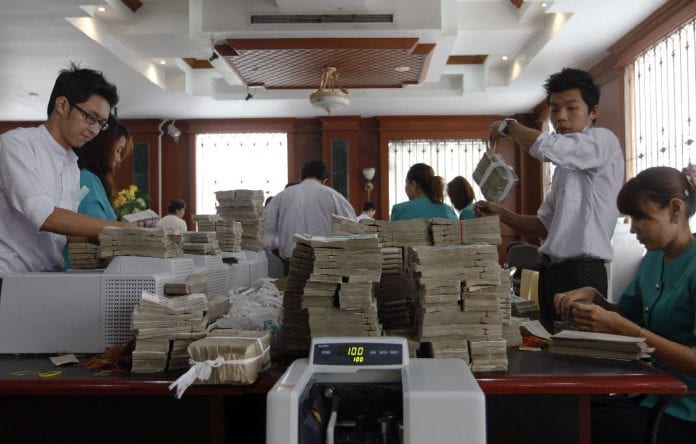 Myanmar’s central bank has started unrestricted sales of foreign currency at its own specified rate to help importers hit by exchange rate fluctuations over the past two weeks.

The kyat has weakened by 26 percent since Myanmar introduced a managed float in 2012 to try to end the disparity between official and unofficial exchange rates. The move was the first significant economic reform by a semi-civilian government that took office a year earlier.

But the gulf between unofficial and official rates has again widened, with dollars in short supply as Myanmar’s imports outpace exports.

The dollar was offered at K1,150 in exchange kiosks in Yangon last Thursday. The official exchange rate was K1,105, down 26 percent from the K818 when the managed float started.

Foreign currency trading is permitted within a range of 0.8 percent above or below the official reference rate. Trading outside that band could result in the loss of foreign exchange licences.

Private banks regularly put in orders for around $20 million at the central bank’s daily dollar auction, but it typically sells only $300,000 to $500,000.

Several unlicensed dealers were detained two weeks ago in a bid to halt black market transactions. The kyat weakened to 1,290 a dollar but gained strength when news of the arrests slowed unofficial trade, dealers said.

Myanmar’s foreign trade has grown quickly but, as imports outpaced exports, its trade deficit jumped 88 percent to $4.9 billion in the fiscal year that ended March 31, according to official data.

A rise in foreign investment, tourism and remittances from overseas workers have helped plug the gap but dollars remain in short supply and the greenback’s rise against emerging market

currencies in general has exacerbated the kyat’s weakness.

Sean Turnell, an expert on Myanmar’s economy at Sydney’s Macquarie University, said measures to support the kyat were “self-defeating”.

“Where the problem comes in is via the efforts to artificially hold up its value,” said Turnell.

“All they really do is add fuel to the idea that there might be a shortage of forex, undermining confidence in the kyat and Myanmar’s financial arrangements broadly.” (Reuters)