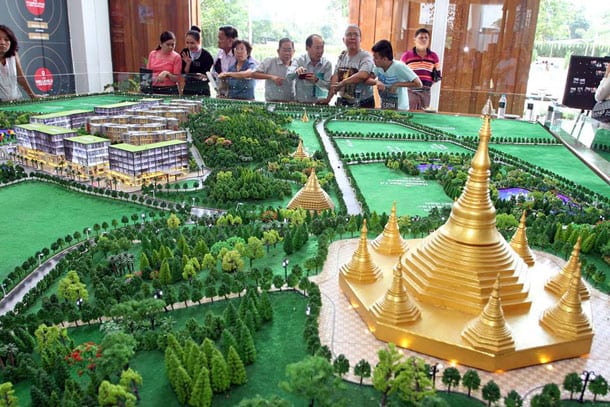 A proposal to Yangon regional parliament to halt the Dagon City 1 project has been rejected on the first day of the session.

The $300-million luxury condo development has been under scrutiny since the Myanmar Investment Commission (MIC) ordered the project suspended on January 22 for further review.

The proposal to parliament from the Association of Myanmar Architects argued that the project would be disturb views of the Shwedagon Pagoda and should be cancelled.

“Currently, the project is temporarily delayed to review if the construction can harm historical and cultural heritage because the project is very close to the Shwedagon Pagoda. The Dagon City 1 project is permitted by the Ministry and Investment Commission. Therefore it is not under the jurisdiction of the regional government.”

However, Dr Nyo Nyo Thin, a member of the parliament from Bahan township, where the project is located, said that YCDC has the authority to stop the project if it is not in line with existing laws and regulations, even though it is located on land owned by the Ministry of Defence.

“Experts have found that the project can harm the sustainability of the Shwedagon Pagoda. This is a very dangerous situation. Therefore, the people who permitted should reconsider.”

A movement called Save the Shwedagon emerged, rallying against the project because they claimed its drainage can harm the structural foundations of the pagoda.

Marga Landmark, the property developer responsible for Dagon City 1, said in a statement last month in response to “unclassified rumours” surrounding the project, “The Dagon City 1 project mainly lies on flat land. Dagon City 1 has started site preparations and has obtained MIC approval on commencement of works on the drainage. Dagon City 1 will execute the plans according to what has been approved and will abide by the law and seek approval like what we have always done.”

It continued, “Marga Landmark reiterates that Dagon City 1 has been proceeding in strict compliance with the approved plans. We have always welcomed dialogue with our critics, but most of them refuse to engage us and continue to spread false rumours without understanding our plans. We urge that our legal rights be duly respected and we welcome a sincere and honest dialogue with these individuals.”

The MIC permit was issued in October 2013, and permission was granted by the Yangon Division Government the following month, according to Marga Landmark.