Checkpoints Put Chokehold on Chickens in Face of Bird Flu 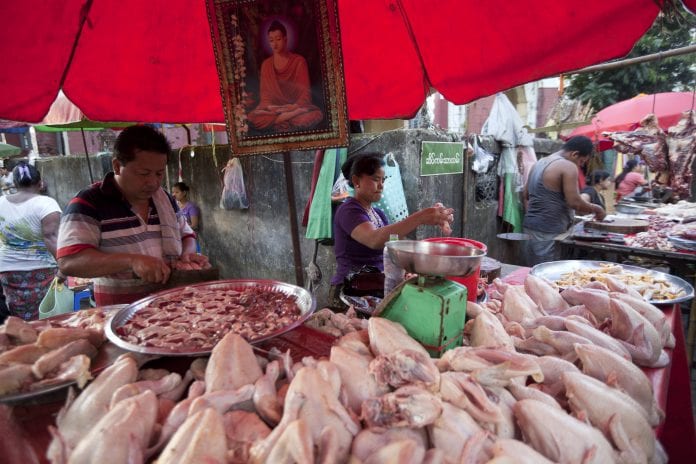 Heightened inspection procedures will be implemented at every entry and exit checkpoint leading to Yangon region to prevent the spread of H5N1 strain of bird flu, after it had been first detected in Monywa township on February 26, according to an official from the Myanmar Livestock Federation (MLF).

“During the course of this outbreak, poultry products coming into Yangon will be inspected to determine if they suitable for human consumption. The regional government has also been informed of this situation,” Dr Hla Hla Thein, vice chairperson of MLF, told Myanmar Business Today.

Chicken, duck, goose, and quail products from Bago and Ayeyarwaddy regions, which are major poultry suppers to Yangon, will need accreditation from the Livestock Breeding and Veterinary Department (LBVD) to enter Yangon.

There is no direct poultry trade between Yangon and Monywa township, which is about 525 miles (840 km) northwest of Yangon, said Dr Hla Hla Thein.

“When an outbreak occurs, every state and region is quarantined. The H5N1 strain first appeared in 2003 in other countries, and first appeared around 2006 in Myanmar. By now, authorities at the location of the outbreak will be investigating the source of the outbreak, and it is expected that they will find it within the next ten days,” said a former official from the LBVD.

Poultry markets and farms are increasing their biohazard security procedures, taking such measures as spraying antibiotic solutions on chickens daily in markets and farms, up from twice per week previously. They have also been installing sanitation facilities to prevent farmers from being contaminated.

H5N1, which first infected humans in 1997 in Hong Kong, has since spread from Asia to Europe and Africa.