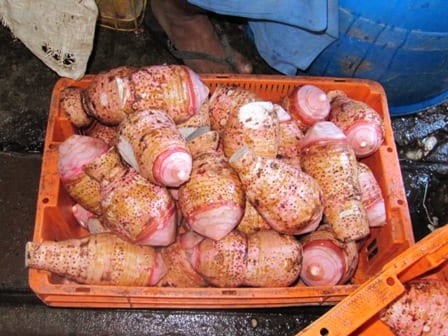 High quality taro being cultivated in Chin state has the capacity to accommodate up to 200,000 tonnes of product to fulfil the increasing demand in countries such as Japan, Korea, China and Thailand, a minister said.

Taro, native to Southern India and Southeast Asia, is a common name for the corms and tubers of several plants in the Araceae family. Of these, Colocasia esculenta is the most widely cultivated.

Due to low demand, the taro produced in Chin state is not exported to India or other regions within Myanmar. Therefore, local traders should connect with the Myanmar Fruit, Flower and Vegetable Producers and Exporters Association in order to find suitable markets for the product, U Ohn Than, deputy union minister for agriculture and irrigation, said.

“The Agriculture Department should promote cultivating high-quality variety taro as a means to commercialise the product, he said.

Production costs for one acre of taro ranges from K300,000 to K500,000, while earnings from one acre can range from K1 million up to K1.5 million depending on the yield.

“It’s not only taro, but we are having a hard time selling other crops because of scarce demand, which is worsened by the low incomes of the poor and hard-to-access transportation networks,” said Ko Victor, a farmer from Htantalan township in Chin state.

The total taro cultivation area is 2,562 acres in the state according to the figures from the Ministry of Agriculture and Irrigation. Among them, 1,687 acres were planted solely with taro while in the other 875 acres taro is grown along with other crops in a multiple cropping method, according to the ministry’s data.

Due to an archaic ordinance issued in 1967, where the land tax rate is charged at only K1 per acre of farmland in Chin state, only K1,687 in tax revenue is collected per year from the 1,687 acres of taro fields.

People of Chin state primarily participate in the subsistence farming of taro, sweet potatoes and some varieties of yams – providing ample opportunity for the commercialisation of agriculture in the state.