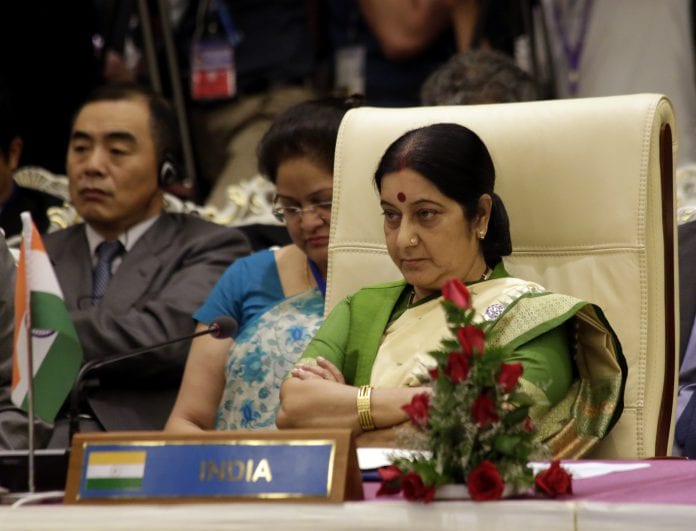 On July 18, Myanmar’s Ministry of Rail Transportation announced the cancellation of an agreement with the Chinese government to build a railway connecting Kunming in China to Kyaukpyu in Rakhine state. Ministry director Myint Wai attributed the cancellation to public opposition.

“According to our study, we’ve heard no voices against the project,” Yang said. “Most of the locals support the project.”

The 1,215 kilometer-long Kunming-Kyaukyu railway, proposed in a 2011 MoU between the Chinese and Myanmar governments, would have followed the route of an existing pipeline that connects gas fields in the Andaman Sea to refineries near Kunming.

The bulk of the $20-billion cost of the project was to be borne by the China Railway Engineering Corporation (CREC). In exchange, the CREC would have retained management rights over the railway for 50 years.

In the three years since the MoU was signed, public opposition to the railway project has hampered all progress on construction. Political parties and civil society groups in Rakhine state, through which the railway would have passed, have protested the construction of the pipeline as well as the railway, citing environmental and social concerns.

Groups in Rakhine also oppose the practice of exporting local natural resources out of Rakhine territory.

The cancellation of the Kunming-Kyaukpyu project follows a growing trend of opposition to Chinese investment in Myanmar’s infrastructure. In 2011, opposition to the multi-billion dollar Myitsone hydroelectric dam, another Chinese project, prompted President Thein Sein to suspend the project indefinitely.

While Chinese projects Myanmar are consistently falling prey to public disapproval, several infrastructure projects that will connect Myanmar with India’s northeast states appear to be making progress, even in the face of local opposition.

First, the Kaladan Multi-Modal Transit Transport Project, which will connect India’s Mizoram State to a deep-sea port in Sittwe, is projected to be completed by 2015.

The project consists of four stages. The first stage will expand Sittwe’s port facility to accommodate large cargo ships. The second stage will widen the Kaladan River in Rakhine and Chin states to serve as an inland waterway transport system for cargo ships. The third phase will connect Paletwa in Chin State to the border with Mizoram. The fourth phase will extend India’s National Highway system the India-Myanmar border.

Groups such as the Kaladan Movement in Rakhine State and the Chin Human Rights Organization have raised alarm about the Kaladan project due to the lack of environmental impact assessments throughout the planning process and the absence of any effort by either the Indian or Myanmar government to consult with populations living along the route of the project.

Earlier this month, the governments of India and Myanmar also pledged to proceed with the creation of a highway bus route that will connect Moreh in India’s Manipur State to Mandalay. The project is set to be completed in October 2014.

However, Brûlé added, “Building efficient infrastructures able to bring along incomes and jobs is not incompatible with the preservation of the environment on a long-term perspective. But our feelings are that the most urgent infrastructures in this country [should be] the ones concerning the needs of Myanmar people [rather than] the needs of western countries.”

The fact that both Indian and Chinese infrastructure projects in Myanmar have faced public opposition, while India’s projects have remained intact, may suggest that the Myanmar government has chosen India to pick up where China has been forced to leave off.

It is clear that projects funded by both India and China have been met with claims that they serveforeigninterests more than the people of Myanmar.

According to Madhurjya Kamar Dutta, program manager for trade and investment facilitation at the Mekong Institute for Development and Cooperation, the Moreh-Mandalay highway will bring economic opportunity as well as people-to-people connectivity between Myanmar and India’s northeastern states, fulfilling several aims of India’s Look-East policy.

“The Moreh-Mandalay Highway is significant as it will complete one of the most important missing links in the entire Asian Highway network and will provide a significant boost to trade, tourism and transportation between Thailand and the landlocked parts of Asia, including the northeast region of India,” said Dutta.

“The road is part of the plan to open the ‘India-Mekong Corridor’ to link India with the new Asian Tiger economies of Indo-China. Thus, it marks the opening of a new economic zone.”

However, despite the apparent imbalance of benefits offered by these India-funded projects, there is no indication that these projects will meet the same fate as China’s have.