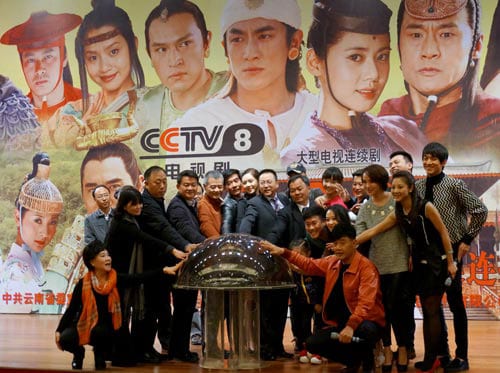 After years of planning and production, the first joint TV series venture between China and Myanmar is finally ready to air.

The new TV drama, The Legends of Music, will start broadcasting in Myanmar on April 14 in Sky Net TV channel.

The Film and TV Program Database of the State Council Information Office of China and local Shwe Than Lwin Media Co Ltd signed an agreement at the Sky Net TV headquarters on the delivery of the films to the Myanmar side for telecast.

The story of the drama centres around a Myanmar prince visiting China during the Tang dynasty over 1,200 year ago, accompanied by a troupe of musical performers who travelled thousands of kilometres to the then Tang dynasty’s capital of Chang An. It aims to bring to life the fascinating history of the period, and how the southern Silk Road promoted exchange between civilisations.

The series was shot in the ancient city of Bagan, once home to the imperial palace and a mighty empire.

The Chinese new generation idol Lin Gengxin and Korean actress Choo Ja Hyun star in the film. In the first two episodes, there will be action footage, songs and dance as well as natural scenes shot in Myanmar, Chinese state-media reports said.

The Legend of Music, which was funded by Yunnan TV station, made its debut in China in December 2013.

Ahead of the airing, The Legends of Music was premiered at a ceremony in Yangon last week. The premiere of the TV series was part of the “Experience China” – Myanmar Tour.

Zhao expressed appreciation over the efforts of joint shooting and production of the TV series involving artists of both sides.

He said Chinese audiences were moved and responded positively on the web praising the artists’ role played in the film when the TV series was first aired by Chinese TV on different channels.

“The Legend of Music has opened a new chapter of cultural exchange and cooperation between China and Myanmar, witnessing the friendship between the two peoples,” he said.

He said such exchange and cooperation in the cultural sector “would continue and expand and enhance the mutual understanding between the two peoples so as to inherit such China- Myanmar friendship generation by generation.”