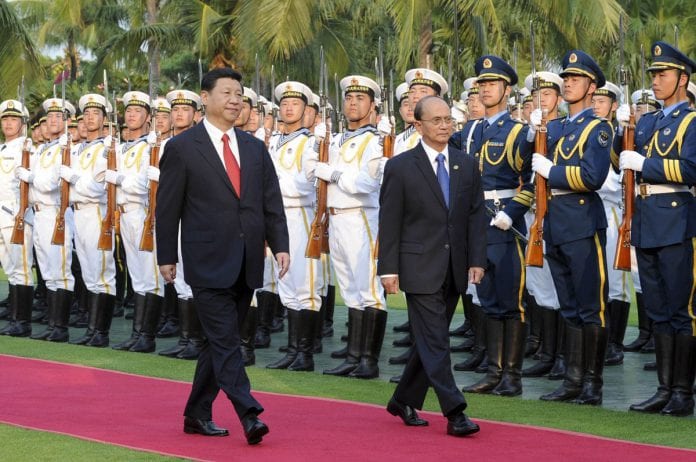 A war of words between their governments erupted after China Power Investment launched a renewed public relations campaign to promote the mega-project. This included a corporate social responsibility report released in December beautifying the dam and its supposed wondrous contributions to local livelihoods and development.

The report was quickly slammed by Myanmar activists as “propaganda” aimed at garnering support for what is a widely unpopular project. Soon after, mainstream media on both sides joined the polemical debate.

China’s official People’s Daily published a special report on January 3 calling for the resumption of the contractually agreed upon dam. Four days later, Myanmar’s prominent, privately-run Eleven Media published a pungent editorial rebuttal, saying that “There should be no compromise on [the] Myitsone project.”

Since its inception, the China-backed Myitsone dam has galvanised widespread local criticism and concern over the project and its potential negative environmental and social impacts. The project is situated in the northern Kachin State, where government forces and ethnic rebels fighting for autonomy are locked in a debilitating armed conflict that reignited in June 2011. Some view the government’s agreement to build the dam as one cause for the renewed hostilities after 17 years of ceasefire.

More than two years after its official suspension, however, it is time for both sides to come to terms with new realities. On one hand, China needs to take an honest look at the situation and honour the Myanmar people’s decision to scrap the project. At the same time, Myanmar needs to face up to and prepare for the legal, financial and diplomatic consequences of their reversed decision on the project. Many analysts have come to view the status of the dam as a barometer for the health of broad China-Myanmar relations.

The controversial Myitsone dam project was first signed between Myanmar’s previous military government and the state-backed China Power Investment in 2005. Construction formally commenced in 2007 but was mostly halted with the announcement of the suspension in September 2011. That same month, Myanmar Foreign Minister Maung Lwin Wunn made an official visit with senior officials in the US State Department aimed at reviving bilateral relations. The controversial dam is located at the confluence of two rivers that form the Irrawaddy, the mother river of Myanmar.

Multiple factors contributed to the widespread opposition to the project, including its sensitive location, perceived corruption and lack of transparency during the negotiation process. Those concerns were compounded by anticipated negative social, economic and environmental impacts and the uneven distribution of the dam’s power output, 90 percent of which was scheduled to be exported to China.

Thein Sein, president of Myanmar’s incumbent quasi-civilian administration and prime minister under the former ruling junta, said he was responding to the “people’s will” in suspending the project. More broadly, the Myitsone dam has had become a symbol of perceived Chinese exploitation of Myanmar at a time the country was in a disadvantaged, isolated position caused by Western economic sanctions and a symbol of the former military government’s tyranny over its people.

In this sense, the Myitsone issue is politically and emotionally charged. The project’s suspension represents Myanmar’s growing assertiveness vis-a-vis its powerful northern neighbour and hopes among its people of eventual victory against decades of military dictatorship and exploitation. To some the project’s demise has come to symbolise the rebirth of the nation and its severance from a subjugated past. Under this premise, many in Myanmar see the suspension of the Myitsone dam as irrevocable.

Since the day of the project’s suspension, the Chinese have consistently pushed for its resumption. Because Thein Sein only suspended, rather than permanently cancelled, the project, China has remained hopeful it will restart under new conditions. Their perseverance is financially-motivated, as a large amount of investment has already been disbursed. As illustrated by China Power Investment’s recent corporate responsibility report, China has steadfastly tried to convince Myanmar’s people of the economic and social benefits of the dam. The Chinese government also intervened, making “the smooth implementation of key cooperative projects” a priority in recent meetings with top Myanmar leaders.

Conflicting expectations have fuelled a tortuous debate about the dam’s future. The Chinese firmly believe that local opposition to the dam originates from popular ignorance about its benefits and their biases about its impacts. Without understanding, let alone accepting the fundamental unacceptability of the project in Myanmar politically and emotionally, China self-defeating imagines that with more persuasion (public relations) and enticements (material concessions), the dam will be resumed.

The Myanmar people, however, perceive such efforts as a powerful neighbour’s overwhelming pressure to impose a deal that benefits China while harming Myanmar. The longer China continues on this path and the harder it pushes, the more damage it will inflict on already strained bilateral relations. Considering China’s broader strategic interests in Myanmar, including massive oil and gas pipelines and the commercial and the strategic corridor into Southeast Asia and South Asia, China needs to face reality and better calculate the long-term costs of its current Myitsone strategy.

In particular, Beijing needs to reconsider whether it is wise to let the destiny of one commercial project sway and affect the future of broader Sino-Myanmar bilateral relations. Indeed, since the suspension of the Myitsone dam, China has not only suspended almost all new major investment in Myanmar, but also let Myitsone become a festering thorn in bilateral political relations.

On the other hand, Myanmar also needs to strategise realistically about their desired endgame on Myitsone. Emotional accusations or political statements against the resumption of the dam do not facilitate a long-term solution and risk nettling a powerful neighbour with a history of interfering in Myanmar’s internal affairs. What they need to carefully consider and propose is a practical, face-saving solution that is mutually acceptable.

If Myanmar is to permanently cancel the Myitsone dam, the reasonable next question is the legal and financial liability associated with the disbursed investment, collateral damage and compensation. It is understandable that Myanmar’s people might perceive such liability as “ridiculous” since “the cancelation only corrects the wrong”. However, simply hoping that a unilateral cancellation of a bilateral legal agreement will have no consequences is short-sighted.

Some Myanmar analysts have cited the “lack of transparency” and “rampant corruption” during the agreement’s negotiation process as grounds for denying liability for an outright cancellation. However, the agreement itself is a responsibility legally inherited by Thein Sein’s government, an obligation it has never denied. The alleged irregularities during the negotiation warrant investigations and punishment of those who committed them, but not the abandonment of the project with no consequences.

In a similar case between the Philippines and China in 2012, the Aquino government cancelled the North Rail built by China due to the Gloria Macapagal-Arroyo government’s alleged corruption in the procurement process. Nevertheless, Manila committed to pay back the Export-Import Bank of China the $185 million disbursed loan in four instalments. In the case of Myitsone, which is much larger in scale, Myanmar might be able to leverage other Chinese strategic and economic interests against the specific amount of reimbursement.

But to call for the cancellation of the project without offering a mutually acceptable solution is neither viable nor realistic. For the sake of their own interests and future bilateral relations, it is time for both China and Myanmar to face this reality on Myitsone.

Yun Sun is a Fellow with the East Asia program at the Stimson Centre, a non-profit and non-partisan think tank that studies peace and security challenges around the world. Sun was previously a visiting fellow at the Centre for Northeast Asia Policy Studies at the Brookings Institution in Washington, DC in 2011, where she focused on the analysis of China’s national security decision making system. Yun was also the China Analyst for International Crisis Group (ICG) based in Beijing from 2008 to 2011, specialising in China’s foreign policy toward conflict countries in Asia and Africa.