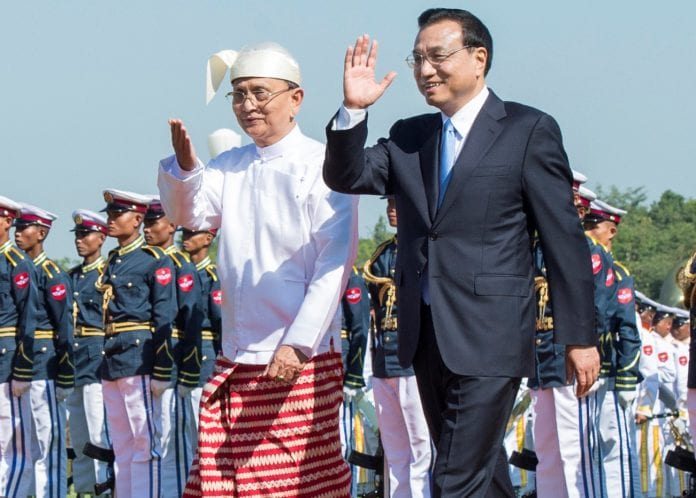 The most public outcome of Chinese Premier Li Keqiang’s recent visit to Myanmar was the signing of $7.8 billion in more than one dozen new deals in different sectors, dominated by the energy sector, according to China’s state-run China Daily.

Even before this deal, China was the largest investor in Myanmar, with investments totalling over $14 billion, a major part of the total foreign direct investment of $50 billion estimated by the Directorate of Investment and Company Administration (DICA) in October.

Since the 2011 reforms, China’s clout has been slowly waning in Myanmar as investors from scores of countries have tried to take advantage of the country’s rapid opening and development.

This latest move is illustrative of the lengths to which China will go to maintain its lead role in Myanmar’s foreign policy and the importance of Myanmar to China, particularly in energy security.

This comes partly in the form of building hospitals and gas-powered power plants and providing agricultural loans, all a result of this most recent deal, and also by becoming a convenient export partner for Myanmar’s rich mix of energy resources.

As a part of this deal, China will to set up an Energy Cooperation Committee to advocate and streamline future projects.

Myanmar currently operates a gas pipeline from Rakhine state up to Kunming in China’s Yunnan Provence, and a parallel oil pipeline is being constructed.

These pipelines could reduce China’s dependency on naval shipments of oil and gas through the narrow Malacca Straits, which has huge US Navy presence, by providing an overland link to the Indian Ocean.

In 2011, President U Thein Sein suspended the Myitsone Dam Project in Kachin state, sowing tensions between the two countries. The project was intended to dam the Ayeyarwaddy river and provide power primarily to Yunnan, and faced widespread public opposition.

On the other side of the border, Kunming has seen several protests in recent years against oil refineries being built close to the previously unpolluted city, built to process Myanmar oil.

At the time of writing this report, the Information and Public Affairs section of the Chinese Embassy in Yangon could not be reached for comment.